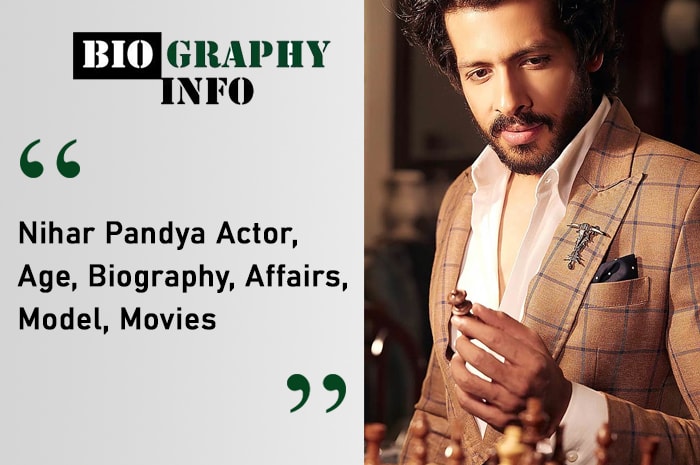 Nihar Pandya (born on 28th March 1982) is an Indian model and actor. He started his career with Salman Khan in the movie Marigold. He is most popular because of his high profile linkups with famous actresses like Deepika Padukone, Gauhar Khan, etc. But the actor was full of praises after he met his soulmate, Neeti Mohan. The feeling was mutual. They both decided to get married soon after they met. They both tied the knot on February 15th   2019 in Hyderabad.

Nihar Pandya was born and brought up in the city of dreams, Mumbai. He belongs to a Gujrati native family who lives in Mumbai, Maharashtra. He has five members in his family including his elder sister and brother. He is very close to his mother Dipti Pandya and Brother Parth Pandya.

He did his schooling from a private school in Mumbai. Later, he got his bachelor’s degree in B.Com in Economics from Narsee Monjee College of Commerce and Economics. He was very passionate about Cricket. In fact, he wanted to be a cricketer. He represented his school in Cricket tournaments. He even represented Mumbai in U16 and U19. He is friends with Shoeb Malik, Yuvraj Singh, and Zaheer Khan. However, as he grew up he got more inclined towards acting and decided to focus only on the industry.

`The reason remains unknown. Nihar appeared in the television show, Comedy nights with Kapil where he proposed the popular singer, Neeti Mohan. The couple revealed their wedding date on the show. Nihar and Neeti tied the knot on 15th February 2019.

In 2003, Nihar Pandya started his modelling career. He was a model for various productions. Later, he aspired to become a film actor so he worked hard and followed that path. He appeared in a number of Himesh Reshammiya’s album songs.

He marked his debut by doing the film, ‘Marigold’ alongside Salman Khan in 2007. After quite some time, he received an offer by Zee Studio. He acted in the film, Manikarnika: The Queen of Jhansi alongside Kangana Ranaut and Ankita Lokhande. The film was a huge success. Nihar played the role of a military commander called Baji Rao 2.