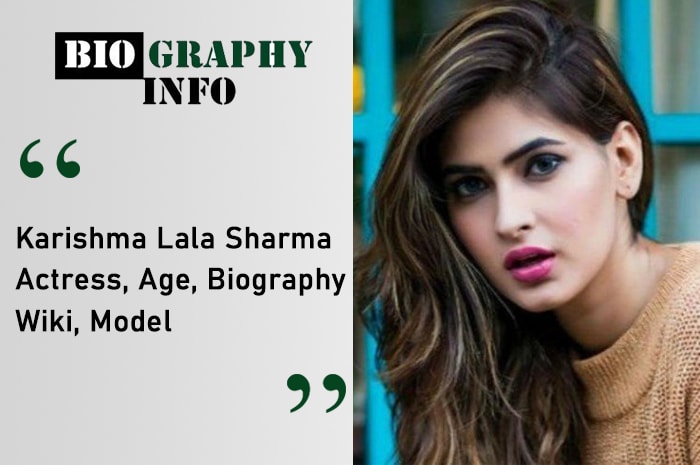 Karishma Lala Sharma ( born on 22nd December 1993) is an Indian Actress and model who predominantly can be seen in Hindi serials and Web Series. She rose to fame after portraying the role of Tina in Pyaar Ka Punchnama 2, Ragini in Ragini MMS: Returns and Isha in Hum I’m Because of Us. She made her Television debut in 2014 as Pia Kirloskar in the famous Zee TV serial “Pavitra Rishta”.

Karishma Lala Sharma was born in a Hindu Family in Mumbai, Maharashtra, India.  During her childhood days, she grew up in Delhi and Patna. She did her schooling presumably from St. Joseph’s Convent High School in Patna, Bihar, India. As a child, she was interested in dancing and singing. She is also trained in classical music for over three years.

She has always been a big fan of Shahrukh Khan and wanted to act with him in the near future. She started modelling at the age of just seventeen. She moved to Mumbai after a few years in order to pursue her acting career. She is extremely secretive about her family and does not discuss their names in public or in media. But it is assumed that they have a close bonding with each other.

Previously Karishma Lala Sharma was in a relationship with the Managing Director of Royal Palms India Pvt Ltd., Omar Nancy. They were often seen posting pictures with each other on social media. However, the couple called it quits after a few years. Presently, Karishma is dating Yuvraaz Arora for quite some time now. They met at a party through common friends and instantly hit it off. They are often seen together in their social media posts and seems to be in the long run.

Karishma always wanted to be an actor since a child. She was fascinated by the media works. Ever since small age, she dreamt of working with her inspiration “Shahrukh Khan “. She started her modelling career during her school days at the age of seventeen. She then moved to Mumbai in order to pursue a career in acting. She started her acting career in 2014 with the famous drama of Zee TV “Pavitra Rishta” as Pia Kirloskar.

It starred Riya Sen, Siddhart Gupta and Nishant Singh. It was the third instalment of the Ragini MMS Franchise. She was also seen in the music video of Gajendra Verma called “Tera Ghata”. She has become one of the most wanted Bold actresses of B Town.