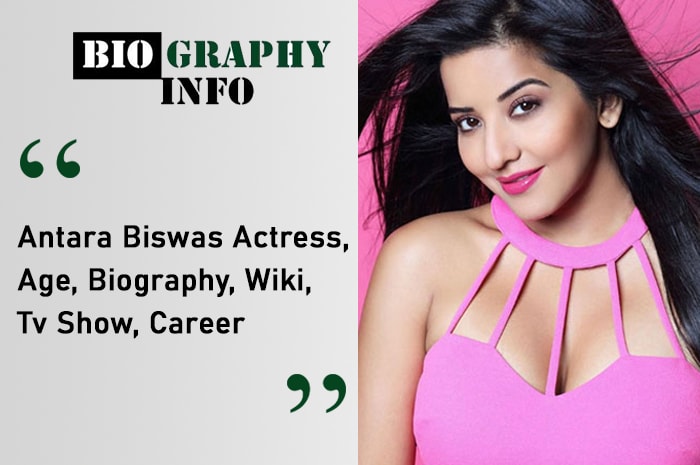 Antara Biswas (born on 21 November 1982) is an Indian actress and a famous model. She is also known by the name of Mona Lisa. She was born in Kolkata, West Bengal, India. She is a well-known figure in the Bhojpuri film industry.

Antara Biswas was born in Kolkata, West Bengal. She belongs to a Bengali Hindu family. She changed her name to Mona Lisa on the request of her uncle as she was very close to him and now it’s her stage name. She doesn’t seem to be in contact with her family and has decided to keep her family a secret from the public. She studied in Julien Day School which is located in South Kolkata.

Antara Biswas got married to her long term boyfriend named Vikrant Singh Hindustani on the sets of the show called Big Boss 10 on 17 January 2017. There was a lavish two-day ceremony inside the Big Boss 10 house.

The two-day ceremony included the Haldi ceremony as well as Mehendi ceremony along with the actual wedding ritual. In the same show, she seemed to be very close to Manu Punjabi. Other than that, she has uploaded a lot of pictures with a mystery man on social media. In all the pictures, she seemed to be in love with that man. So according to social media, Antara was already married before and got divorced later. However, nobody knows whether it’s the truth or just a rumour.

After completing her graduation, Antara went to become a small-time TV actress and was also a part of several Oriya video albums. She worked in multiple low budget films before she got to be part of Bollywood. She made her debut as an actress in an Oriya film called Jai Sriram(1999).

She even acted in a Kannada film called Jackpot which was released in 2005. She worked really hard to gain recognition and finally in 2010, she became the most sought after actress in the Bhojpuri film industry according to the article published in The Hindu.