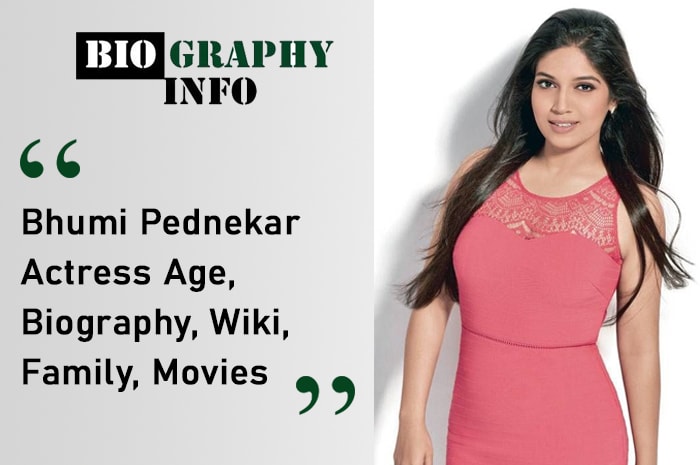 Bhumi Pednekar (born on 18th July 1989) is an Indian actress who acts in Hindi films. She initially worked as an assistant casting director at Yash Raj Films for six years. Bhumi made her Bollywood debut in 2015 with the film Dum Laga Ke Haisha opposite of Ayushmaan Khuranna, as an overweight bride. The movie earned her the Filmfare Award for Best Female Debut.

Her dedication to her profession is always in the news. Instead of using aesthetics or body double, she prefers to gain and lose weight to come into character. She is a versatile actor and has given some of the highest-grossing Indian films. Bhumi has been featured in 30 of 30 lists of Forbes India.

Bhumi was born to parents Satish and Sumitra in Bombay 1989. Her father Satish is the former home and labour minister of Maharashtra and her Mother Sumitra worked as an anti-tobacco activist after the death of her husband from oral cancer.

Bhumi is from mixed descent as her father was Marathi and mother was Haryanvi. She did her schooling from Arya Vidya Mandir in Juhu. Her parents took out a loan when she was 15 for her to study acting at Whistling Woods International but she was expelled due to low attendance. After a year and a half, she joined Yash Raj Films as an assistant director to pay off the study loan. She worked in the company for six years under Shanoo Sharma.

Bhumi completed her schooling from Arya Vidya Mandir School, Mumbai. She first enrolled in Communication and Media Arts, Mumbai but got expelled due to low attendance. Later, she graduated from the University of Mumbai as a bachelor in commerce. She also attended Whistling Woods International College of Films to learn acting.

She wanted to be an actor since12 years old. At 18 years of age, she applied for a vacant post in Yash Raj Films but got rejected. After a month, she was called to work as an assistant casting director.

Pednekar started off her acting career with the film Dum Laga Ke Haisha in 2015 for which she bagged the Filmfare award. In the same year, she appeared in Y-Film’s mini web series Man’s World. The four-part series was digitally premiered on YouTube. Bhumi appeared in the social problem film Toilet: Ek Prem Katha in 2017 alongside Akshay Kumar, the film world widely grossed over Rs. 3 billion (the US $42 million) becoming one of the highest-grossing Indian films of all time.

She did another film Shubh Mangal Saavdhan in 2017 with Khuranna. In 2018, she appeared in Zoya Akhtar’s Netflix anthology film Lust Stories in 2018. Abhishek Chaubey’s Sonchiriya was her first release of 2019. She next starred in the biographical film Saand Ki Aankh opposite Taapsee Pannu.

Both of them were jointly awarded the Screen Award and Filmfare Critics Award for Best Actress. She also starred in Bala and Pati Patni Aur Woh in 2019. She did several brief roles in the comedy-drama Shubh Mangal Zyada Saavdhan and the horror film Bhoot- Part One: The Haunted Ship. She will next be seen in Alankrita Shrivastava’s comedy Dolly Kitty Aur Woh Chamakte Sitare, Takht, Badhaai Do alongside Rajkumar Rao and Durgavati.

Bhumi usually plays “women of fortitude with strong moral fibre, mostly hailing from small towns”, as said by journalist Priyanka Roy of The Telegraph. She was featured in the 30 Under 30 list of 2018 by Forbes India. In 2019 she began a campaign named Climate Warrior to raise awareness on environmental protection and global warming. She is vocal about issues like pay parity and gender pay gap in Bollywood. The star teamed with MTV India for  Nishedh campaign, which aims to create awareness about health issues, including reproductive health among the youth in 2020.

Sonchiriya, a crime drama was her first movie in 2019. Then she shared the screen with Taapsee Pannu in Saand ki Aankh, but both the film were unsuccessful at the box office. Later, she played the role of a small town educated woman in Bala, a movie based on a man dealing with baldness. Her last film of the year 2019 was Pati Patni Aur Woh in which she portrayed as a housewife whose husband develops an attraction for his new female secretary.