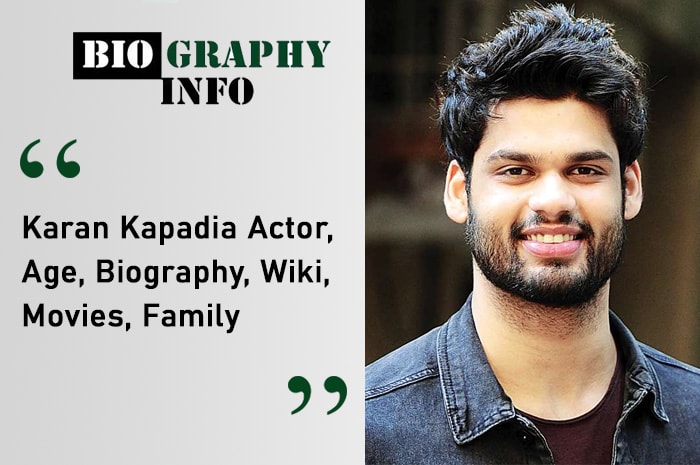 Karan Kapadia (born 16th September 1993) is an Indian actor who is the son of former Bollywood actress late Simple Kapadia who passed away due to cancer in 2009 while he was still young. He made his Bollywood debut with the action thriller film Blank. After the death of his mother, he shifted with his maternal aunt Dimple who’s been a strong pillar for him both as a mother and father ever since.

Karan Kapadia was born to Late actress and costume designer Simple Kapadia who passed away due to cancer in 2009 while he was only 15 years old. He belonged to a Hindu family. His father was Sardarji who also passed away while he was young. After the loss of his mother, he shifted with his maternal aunt Dimple, who was also an actor she has been both a mother and father to him ever since.

When he has only 14 years old he once said about his wish to become an actor to cousin and brother in law Twinkle Khanna (former actress and interior designer) and Akshay Kumar who didn’t take him seriously then but when they saw his determination they backed him up and supported him all through his journey.

His other cousin Rinkee Khanna is also an actor. Karan pursued his acting course from Jeff Goldberg Studio before venture his film career. He was 110kgs prior to his debut but he lost all the weight in order to start his career.

The actor is rumoured to be dating hair stylist Nikita Gosain. It is revealed through sources that the duo met through common friends and soon they hit it off and started dating each other. They are also seen posting pictures with each other on their social media accounts.

Karan did his acting course from Jeff Goldberg Studio before entering into films. He once told his Cousin and Brother in law Twinkle Khanna and Akshay Kumar about his wish to venture films but they didn’t take seriously as he was only 14 years old then but later when they saw the determination they backed him supported him through his journey.

He lost his weight from 110kgs to 88kgs before appearing on the screen. Karan started his career as an assistant director in Akshay Kumar’s Boss. He also acted in the short film Crescendo. In 2019 he made his debut with Behzad Khambata’s directorial Blank where he played the role of Hanif, a 26-year-old boy who tries to figure out his role in the world. He did the movie alongside Sunny Deol.

Movies as an assistant director

Movies as an actor