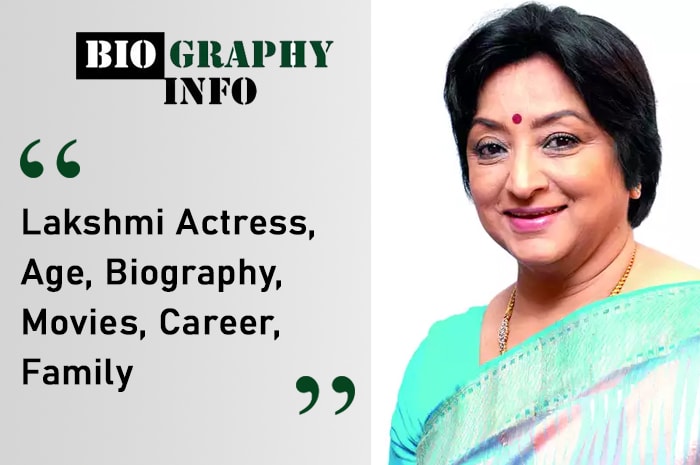 Lakshmi was born to Tamil actress Kumari Rukmini and Indian film producer, director, thespian, screenwriter, editor and actor Yaragudipati  Varada Rao. She was born and brought up in a Telegu and Tamil family in Chennai, Tamil Nadu. Her father was and still is a known name in Telegu, Tamil and Kannada film industry.

The actor was first married to insurance company worker Bhaskar in 1969. They have a daughter- actress Aishwarya who was born 1971. The couple got divorced in 1974.

In the seat of the film Chattakari, she fell in love with her co-star Mohan Sharma and married him in 1975 but the duo divorced in 1980 after 5 years of being together.

During shooting the film En Uyir Kannamma, the star and actor-director M. Sivachandran fell in love and got married in 1987. They adopted a girl named Samyuktha in 2000. The couple is still very much in love and together after these many years.

The actor established herself after appearing in all four South Indian language films in the 1970s. She rose to fame with her successful film Chattakari in 1974, which won her the Kerala State Film Award for Best actress. The film was remade in Hindi as Julie in 1975 and in Telegu as Miss Julie Prema Katha in 1975.

This won her the Bengal Film Journalist’s Association Award for the most outstanding work of the year in addition to a Filmfare Best Actress Award. After the Malayalam film success, she acted in a number of Malayalam films. She won Filmfare awards for Best Actress for Chalanum and Mohiniyaattam. Her pairing with Kannada star Anant Nag in the 70s and 80s is considered one of the best of all time in South Indian cinema. They have acted in over 25 films together.

She won the National Film Award for Best Actress for Sila Nerangalil Sila Manithargi in 1977 becoming the first South Indian Actress to win that category for a Tamil Film. She played as a supporting character in films like Jeans(1998) and Hulchul (2004). She has acted in more than 400 films and has also been involved in politics. She made her directorial debut with the Kannada film Yours, Mine and Ours and Makkala Sanya.

She hosted two walk shows during her film break. The Tamil talk show was Achamillai, Achamillai and the Kannada talk show Idu Kathe Alla Jeevana in Savarna Channel. She also hosts a talk show in Tamil for Vijay TV called Kadhai Alla Nijam. She has hosted a  talk show in Kannada for Suvarna Channel, Neena? Nana? After the end of the shows, she returned to the cinema. Currently, she judges Malayalam reality show Champions on Surya TV. She is also the Judge of Kannada reality show called Drama Juniors on Zee Kannada.