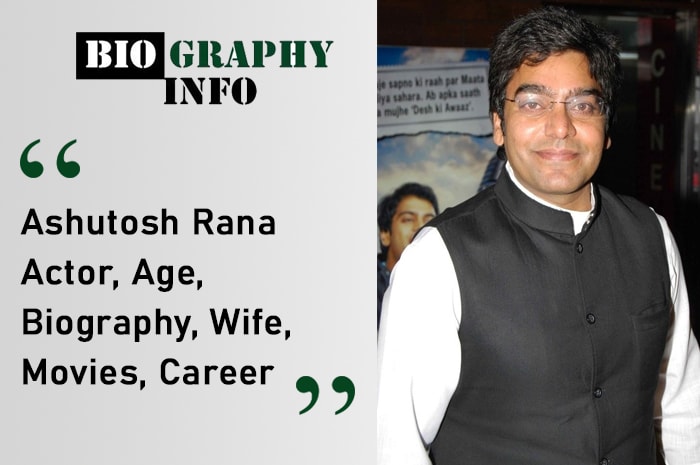 Ashutosh Rana Ramnarayan Neekhra (born on 10th November 1962), is known as Ashutosh Rana. He is an Indian actor and works in Hindi, Marathi, Tamil, Telegu and Kannada films. He has also done a number of Television shows and has won two Filmfare awards for his negative role. He is one of India’s beloved villains.

Ashutosh was born in Gadarwara district of Narsinghpur in Madhya Pradesh state. He was brought up there as well and finished his primary schooling there itself.  He used to annually play as Raavan in the local Ramleela productions in his town.

He further went for National School of Drama in New Delhi to study acting. He has also done a number of acts in Bombay’s Prithvi Theatre under Guru Satyadev Dubey. He has his Hindu Guruji whom he also calls as Daddaji.

Ashutosh Rana is married to Bollywood actress Renuka Sahane and the couple have to sons together – Satyendra and Shauryaman.

Before entering into film industry Rana was a known face in Indian serials. His debut was with the television serial Swabhimaan. He did a number of serials after that – Farz, Sazish, Jax, Kabhi and Waris. He anchored the Television show Baazi Kiski and also hosted a reality show called Sarkaar Ki Duniya which took place in Mango Island in Karwar, Karnataka. In 2010, he acted in the Star Plus Serial Kaali- Ek Agnipariksha. He played the negative role of Thakral. He also was the lead in Doordarshan serial Apradhi Koun.

He became a famous personality in the Indian cinema with the film Dushman where he was a cold-blooded psychopath. He has also acted in supporting roles but majorly as the negative actor. He also has acted in South Indian films. He is commonly seen in Mahesh Bhatt films. He was Alia’s father in the Movie Humpty Sharma Ki Dulhania, a Karan  Johar film.