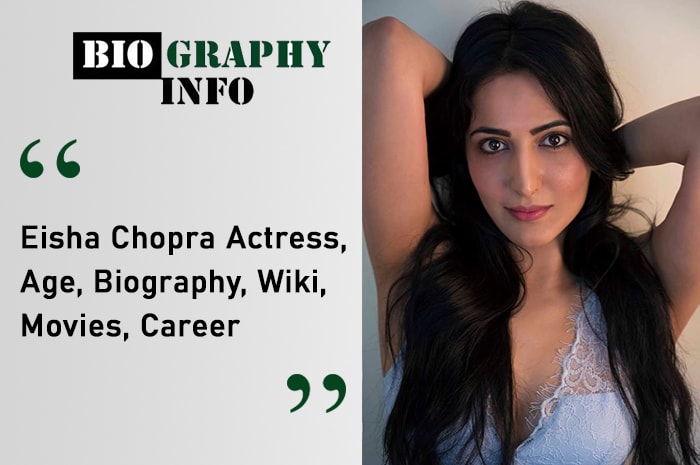 Eisha Chopra (born on 16th March 1983) is an Indian Actor, model and writer. She also has quite an influence over social media and has a huge following. She made her debut in Bollywood with the film Neerja in 2016, as a supporting actress. Besides that, she has also been part of various web series such as What the Folks ( season one and two), POW, CEO Giri season 2 and TGIDF.

She has also been a part of various commercial advertisements.

Eisha Chopra was born into a Hindu family in Delhi, India.  Her father is Dr Alok Chopra. She has a sister named Divya Chopra who is a psychologist by profession. Eisha did her schooling from Modern School in Vasant Vihar, New Delhi, India.

She then went to Parsons School of Design in New York for her bachelor’s degree in Communication Designing.  She started performing and doing theatres at the age of six. She is also an animal lover and has a pet dog named Bagheera. She has a knack for writing as well.

She and her sister are very to close to each other and are often seen sharing pictures with each other. All of her family is settled in New Delhi, India.

Eisha Chopra started her career in 2014 by acting in a short film titled Popcorn where she played the character of Charulata. Later in 2015, she was seen in the short film called Parchchai. After the two short films, she made her Bollywood debut with the role of a supporting actress in the film Neerja in 2016 alongside Sonam Kapoor.

In the same year, she played a role in the TV series named P.O.W. Bandi Yudh Ke. In 2016, she also co-wrote a short film called Clean Shaven. The film received positive reviews and was also screened at the Tribeca Film Festival 2016 in New York. In 2017, she played parts infamous web series such as Bewafaa as Jyotsna and What The Folks as Anita Sharma.

She has also been featured in many TV Commercials like Dish TV, TVC, ICIC, Micromax, Sony Max, Tata Docomo and Forever Mark. She also can be seen in Filter Copy videos. She has a huge social media followers on Instagram.

Short films as an actor

Bollywood films as an actor

Web series as an actor

Short film as a write