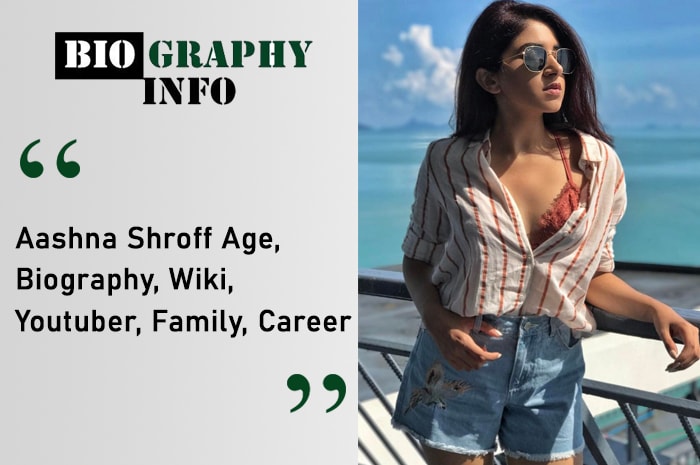 Aashna Shroff is a popular social media Influencer. She also runs a YouTube channel known as ‘The Snob Journal’ where she used to share beauty, fashion and lifestyle related videos. She is a self-made celebrity. Her channel has more than 150k subscribers on her YouTube channel. Apart from YouTube, she is also very popular on Instagram. She has 737k followers on her Instagram page. She is also an entrepreneur as she owns her own online store, named ‘The Snob Shop.’

Aashna Shroff was born and brought up in Mumbai, Maharashtra. She belongs to a Sindhi Hindu family. She was very young when her parents divorced. Her mother raised her alone. She is the single child of her parents. Her mother is a former Indian model who also worked in Bollywood.

She completed her early education from a CBSE affiliated school in Mumbai and did her higher secondary school from Mithibai College in the city. After that, she did an online course in Early Childhood Education, and then she did a course in interior designing and photography. She finally pursued her degree in fashion designing from London College of Fashion in London.

Aashna was dating the popular singer Arman Malik but later they broke up. Aashna is currently dating Siddhant who is a photographer. The couple is not very open about their relationship. But through her posts, it is very much clear that they both are very close. Aashna likes to maintain her personal life low-key.

Aashna Shroff started her career at a very young age. She used to work alongside her mother when she was a kid. She has been a child model for many advertisements. When she grew up, she started working as a pre-school teacher but after some time, she realized that she wasn’t meant to be a teacher. So, she pursued her degree in fashion designing from London College of Fashion and later opened her own shop named, ‘The Snob Shop’ on Facebook.

She used to import clothes from China, customize it and then sell it on her online shop. The sales were not that big but enough to keep her motivated. She started blogging at the age of 20 side by side from where she received a lot of appreciation from the audience for her sense of style.

She started her YouTube channel on which she shares videos related to fashion, lifestyle beauty, etc. Her YouTube channel has more than 1.5 lakh subscribers. She also has huge 737K followers on her Instagram page. She has promoted or endorsed many well-known brands on her social media like Dove, Myntra, VERO MODA, ZARA, Moschino, Lifestyle Store, Burberry, Bio-oil, Nykaa etc.