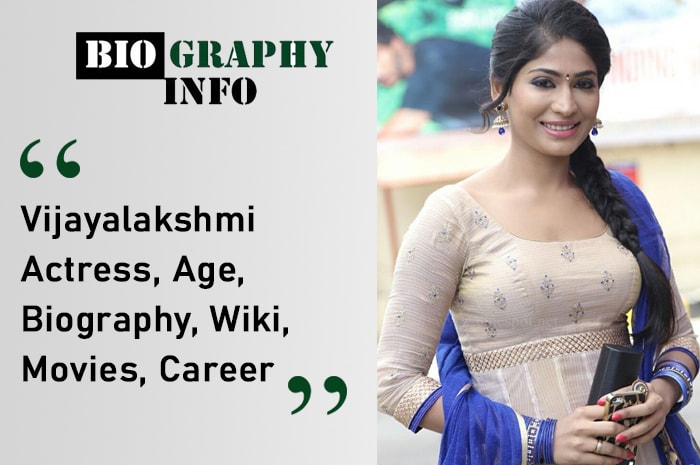 Vijayalakshmi (born on 1 July 1983 ) is an Indian actress who primarily appeared in Kannada films. She also has done a couple of Tamil and Malayalam films. She has won the Filmfare Award for Best Actress (Kannada) for her role as Rani in the film Nagamandala. Vijayalakshmi was born in Bengaluru, India.

Vijayalakshmi has acted in over 40 films all throughout her career of which 25 of them were in Kannada. She was well known for her beauty and personality.

Vijayalakshmi was born in Bengaluru, India. She pursued her studies in Karnataka and Bangalore but later moved out to Chennai where she resided before moving back. In 2006, it was reported that she attempted suicide by over dozing with sleeping pills.

She later filed an FIR against a directed for harassing the actor and wanting to marry her. The decision came at the end of a tough year.  That same year her father had also died. The actor had a hard time but she survived and was recovered.

In November 2006 she announced her engagement with actor Srujan Lokesh after three years of dating. The wedding was planned for March 2007 but unfortunately, the wedding was called off. Many say that the suicide report that came was fake and qaa staged by the actor herself in a desperate attempt for publicity. She is a talented and beautiful actress but many avoid working with her due to her rash and bad behaviour.

Vijayalakshmi has acted in over 40 films all throughout her career of which 25 of them were in Kannada. She was well known for her beauty and personality. She debuted in with the director T.S Nagabharana in his film Nagamandala. Her debut film was a folk tale opposite Prakash Raj. She has acted in the Tamil films Friends along with Vijay and Surya, and the Film Soori.

The film Friends was a big hit. She came back to the Tamil industry with the comedy film Boss Engira Bhaskaran. It became the biggest success of 2010. She got prominence in Telegu industry with the film Hanuman Junction. She has acted in the Malayalam film Devadoothan with Mohanlal.

The star has acted in several Tamil television serials. She was also the host of the Bangarada Bete game show which was produced by Radaan Mediaworks.