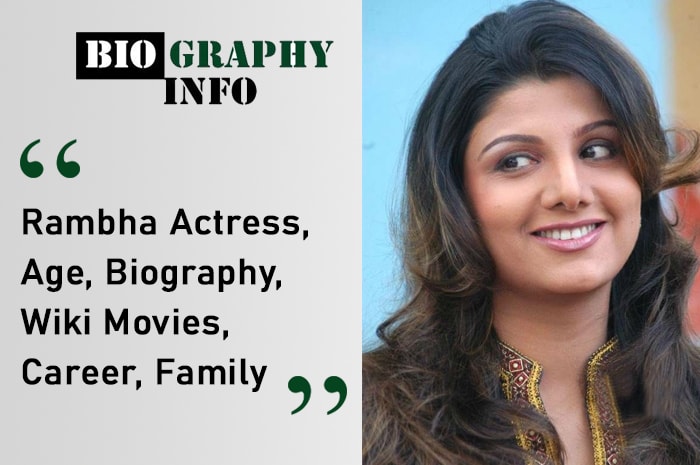 Vijayalakshmi Yeedi (born on 5th June 1976) is the real name of famous Indian actress Rambha. Rambha has acted in Malayalam, Kannada, Tamil, Telegu, Hindi, Bhojpuri and Bengali language movies. She has appeared alongside most of India’s famous leading actors and legends.

Rambha was born in Vijayawada, Andhra Pradesh to a Telegu family. She was born to parents Venkateshwara Rao Yeedi and Usha Rani. She did her schooling from Atkinsons Senior Secondary School in Vijayawada.

During her school’s annual function when she was at seventh standard she acted as Amman. The function was attended by director Hariharan who later introduced her as the leading actress in the Malayalam film – Sargam. She first was referred to as Amrutha but later changed her screen name to Rambha after she played the role in her Telegu debut – Aa Okkati Adakku.

Rambha is married to Indrakumar Pathmanathan who is a Canada based businessman. They married on 8th April 2010 at Karnataka Kalyana Mandapam in Tirumala. They organized a wedding reception on 11th April 2010 at Rani Meyyaiamma Hall, Chennai. They celebrated their honeymoon in Fiji and New Zealand.

The couple settled in Toronto in North York. They have two daughters together. However, their marriage did not last happily for long and they got separated for some time. In 2016, Rambha moved to court for custody of her children.

Rambha ended her education at the age of 15 and moved ahead with director Hariharan to start her acting career. She did the Malayalam film Sargam in 1992 opposite Vineeth. The film did well and she was spotted subsequently and given offers in huge numbers of movies.

She made her Telegu debut with director E.V.V. Satyanarayana and she did the film Aa Okkati Adakku opposite Rajendra Prasad. Rambha kept on picking glamorous roles to receive film offers. She also acted with Chiranjeevi in Hitler in 1997.

The actor started her career as a producer with her brother in Three Roses in 2003 but the film failed at the box office and she fell into debt. She sold her house at Mount Road in order to pay the debt.

But she soon recovered her finances. She has done several language films but maintained the ratio of Malayalam films she did. Her last Malayalam film was Paayum Pulli in 2007. After her marriage, she gave up acting in movies and judges reality  TV shows.