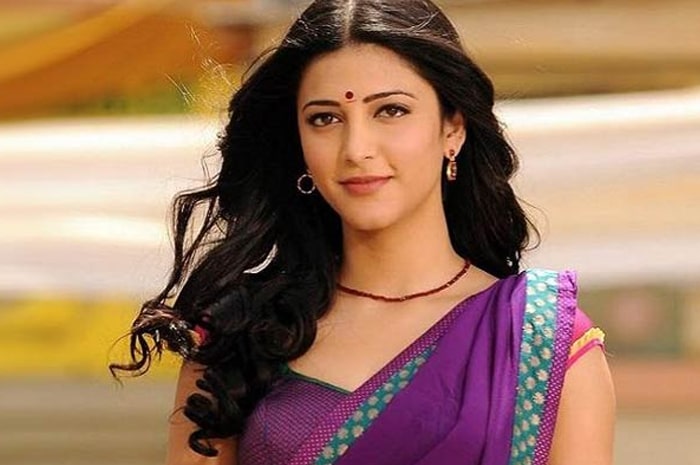 Shruti Haasan born on 28 January 1986) is an Indian film actress and singer. She has worked in several language movies such as Tamil, Telegu and Hindi. She was born in the famous Hassan family of the South Indian industry. She has received a number of awards including three Filmfare awards south and has established her name in the South Indian cinema.

Haasan was born to the actor and politician Kamal Haasan and actor Sarika Thakur in Madras (Chennai). Her father is Tamil while her mother is half Rajput and half Maharashtrian. Her younger sister Akshara is also an actress. The actor and lawyer Charuhasan is her uncle. Her cousins are actresses Anu Haasan and Suhasini Maniratnam. She studied at Lady Andal School in Chennai and moved to Mumbai to study psychology at St. Andrew’s College.

She primarily focused on cinema and music and eventually travelled to the US to continue to learn music at the Musicians Institute in California, before returning to Chennai.

Shruti Haasan started her career at a very young age as a child artist. She sang in films and appeared in a guest role in her father’s directorial Hey Ram (2000), before making her adult acting debut in the 2009 Bollywood movie Luck with her childhood friend Imran Khan.

She won the Filmfare Award for Best Actress – Telegu for the action comedy film Race Gurram (2014). Shruti has also done several Bollywood films such as D-Day (2013), Ramaiya Vastavaiya (2013), the action film Gabbar is Back (2015) and the comedy Welcome Back (2015).

In 2018 she starred opposite Vidyut Jammwal in a film from Manjrekar. She also collaborated with her father on the trilingual adventure film Sabaash Naidu, a spinoff of the 2008 film Dasavathaaram. In 2019 she made her entry into the American action drama series Treadstone in which she has a recurring role.

Shruti is also an established playback singer. She has also received several award nominations for playback singing. She started her career as a music director with her father’s production Unnaipol Oruvan (2009) and has formed her own band.