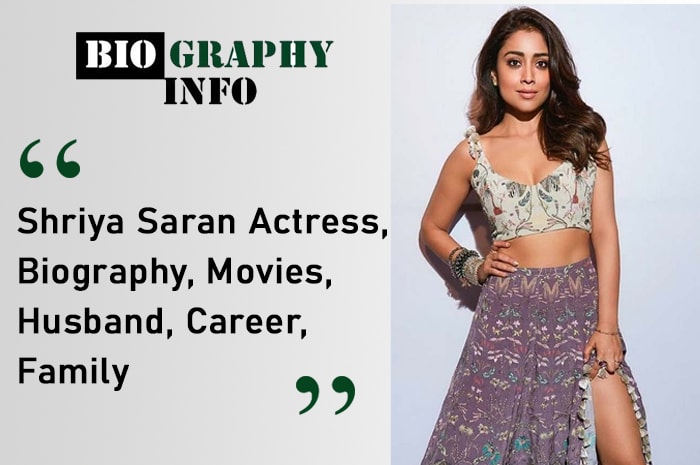 Shriya Saran Bhatnagar (born on 11 September 1982), is an Indian actress and model who is known for her roles in the South Indian movies, Bollywood movies and American cinema. The actor was born in Dehradun and spent her childhood in Haridwar.

Her dance teacher made her appearance in a music video Thirakti Kun Hawa that brought her in the notice by several filmmakers and was subsequently offered a lead role. Although Shriya aspired to become a dancer, she gave in to her movie career. She made her debut in 2001, in Telegu film Ishtam, and her first success with the film Santosham (2002).

Saran is the daughter of Pushpen and Neerja Saran. Her father and mother are both retired and were civil engineer and chemistry teacher, respectively. She did her schooling from both the schools where her mother taught. She has an elder brother who lives in Mumbai. Growing up, Saran lived in a small town f BHEL colony in Haridwar.

She got her Bachelor of Arts in Literature from Lady Shri Ram College in Delhi. She is a trained Rajasthani folk and Kathak dancer and during her school days did a number of shows, incorporating social issues in the dance performance.

The actor has always been reluctant to talk when it is about her romantic involvements. On 12 March she married her Russian boyfriend Andrei Koscheev at her Lokhandwala residence. She also well known for her charity events and also has opened a spa with the visually challenged.

Shriya Saran made her debut in 2001 with the film Ishtam and had her first commercial success with Santosham (2002). The actor was seen in a number of Telegu films while making a balance in the Hindi and Tamil industry. She was praised for her performance in the 2007 film Awarapan. She also played the lead role in the English film-“the other end of the line”.

It was an American-Indian co-production. She has done a number of famous films such as –

In addition to her role in the industry, the actor has been the brand ambassador for brands across India, endorsing beauty and health products. She is a philanthropist and has volunteered for charitable organizations. In 2011, she opened a spa which is run by visually challenged people. She was also the brand ambassador for Celebrity Cricket League for its two seasons.