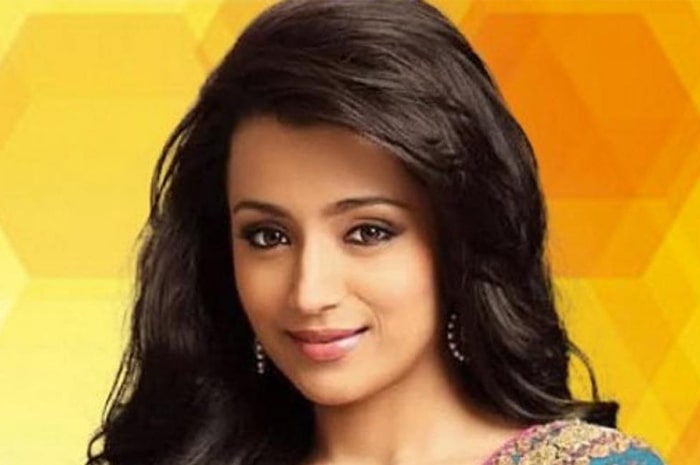 Trisha Krishnan who was born on 4th May 1983 is an Indian film actress and Model. She primarily works in Telegu and Tamil movies. She entered into the field of acting after participating in several beauty pageants. The Model is the titleholder of the Miss Madras Contest 1999. She is a popular name in the South Indian film industry and has achieved worldwide appreciation due to her movies and role in the UNICEF of which she is a brand ambassador.

The actress is the daughter of Krishnan and Uma, born in Chennai. The actress belongs to the family of Tamil Palakkad Iyer. Trisha initially aspired to become a criminal psychologist and did her schooling from Sacred Heart Matriculation School in Church Park. Later on, she went to pursue a Bachelor of Business Administration (BBA) at the Ethiraj College for Women(Chennai).

She always wanted to become an actress but resisted the urge. Later on, she proceeded with her call to join the industry and got into modelling and appeared in several print and television commercials. She won the title of “Beautiful Smile” in Miss India 2001 pageant. This marked her entry into the film industry. She starred in Falguni Pathak’s music video “Meri Chunar Udd Jaye” as Ayesha Takia’s friend, which was directed by Radhika Rao and Vinay Sapru.

Trisha pitched for an acting role in the Tamil movie Lesa Lesa by Indian film director Priyadarshan; it marked the start of her career. The beginning of her profession coincided with her college course due to which she got into a tight schedule and had a hard time managing her shoots and education. She compensated for her educational losses by attending summer classes.

She is fluent in Hindi, French, English, Tamil and Telegu.

The star is known to be very close to her parents, especially her mother, Uma Krishnan is a famous personality among the Tamil Industry due to her nature and beauty. She was offered several films projects from many directors and actor including Kamal Hassan but turned them down as she wanted to concentrate on her daughter’s career.

The mother accompanies her daughter everywhere – shoots, events and functions. The duo has appeared in a commercial advertisement together. Trisha often remarks that her mother has been her pillar of strength all through her ups and downs, and it is immeasurable how close they are.

Trisha was engaged to a Chennai based businessman Varun Manian, but on May 2015 she confirmed that the couple had ended their engagement due to personal conflicts.

The famous actress and Model reside in Chennai with her mother and grandmother.

Trisha’s film career started right after her participation in the 1999 Miss India beauty pageant. She appeared in an uncredited role the Tamil film “Jodi”. She had her first role as a lead actress in 2002 in the movie “Mounam Pesiyadhe”. She later went on appearing in films like Sammy (2003) and Ghilli (2004) which were hugely successful Tamil films and led to rising of fame. Famous Telegu film Varshan (2004) was the project that her first South Filmfare Best Actress Award.

She also won the for two more times for Nuvvostanante Nenoddantana (2005) and Aadavari Matalaku Ardhalu Vale (2007). She did her Bollywood debut in the film Khatta Meetha in 2010. She was seen in Abhiyum Naanum (2008) and Vinnaithaandi Varuvaayaa (2010) which is considered her career’s best performance for which she won Vijay Award for Favourite Heroine and was nominated for Filmfare Best Tamil Actress Award. Her 2015 films included Yennai Arindhaal opposite Ajith Kumar, Thoongavanam with Kamal Hassan, Bhooloham with Jayam Ravi in Tamil.

She has also a part of the horror film Aranmanai 2. In 2018, she acted in Malayam film Hey Jude with Nivin Pauly forging her Malayalam debut. She has been the lead actress in a Tamil Romance ’96 opposite Vijay Sethupia and receives applause from critics Janani K of India Today. Currently, she is shooting three films – Bhogi, Garjanai and Petta opposite of the superstar Rajnikanth.

Trisha has been the brand ambassador of Goodwill of PETA. She collaborated with People of Ethical Treatment of Animals(PETA) in 2010. She was also the Goodwill Ambassador for Angel of Animals campaign organized by PETA in 2010. Trisha has replaced Rani Mukherjee and Preeti Zinta as Brand Ambassador of Fanta and Scooty Pep+ respectively. She is also the brand ambassador for Vivel Di Wills, a product by ITC Limited. The actor also replaced Asin in Fairever Fairness cream commercial.