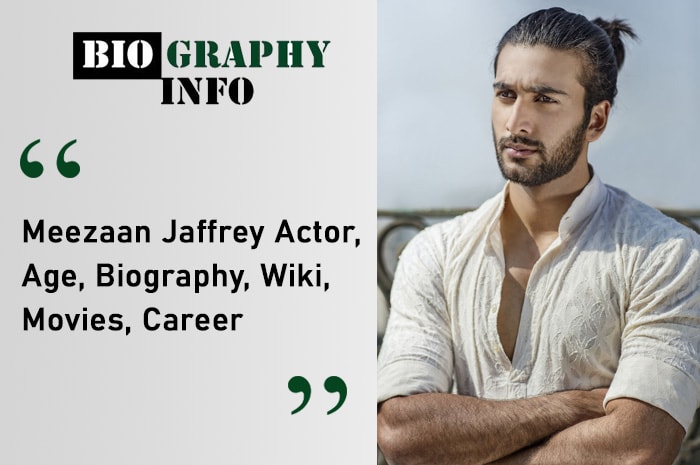 Meezaan Jaffrey is an actor in the Indian film industry who works in Bollywood films. He is the son of famous Bollywood star Javed Jaffrey. The actor made his debut in 2019 with Sanjay Leela Bhansali’s production in the movie Malaal with the producer’s niece Sharmin Sehgal. He is trained in dancing and martial arts. Further, he will be seen in Hungama 2.

Meezaan Jaffrey was born to actor Javed Jaffrey and housewife Habiba Jaffrey in Mumbai, Maharashtra, India.  He belongs to a Muslim Shia family and doesn’t want much media attention. He is the eldest son of his parents. He was a younger sister named Alaviaa Jaffrey and a young brother named Abbas Jaffrey.

He is the grandson of famous Bollywood actor and comedian Jagdeep. He did his schooling from Ecole Mondiale World School in Mumbai, Maharashtra, India.  He further went to study business studies but later realized it wasn’t for him and enrolled in the School of Visual Arts in New York. His co-star Sharmin Segal was his classmate and was assisting in the film Mary Kom which further inspired him to pursue acting.

Meezaan is often romantically linked with the controversial star kid Navya Naveli Nanda, who is the granddaughter of Bollywood megastar Amitabh Bachchan. He is often spotted hanging out with the young star kid in Mumbai. They also have shared pictures of them on Instagram which suggests a strong bond between them. But like most stars, they haven’t confirmed anything yet.

Meezaan initially moved ahead to study business but later decided that it wasn’t his calling and enrolled in School of Visual Arts in New York to study acting. He also trained in dancing and martial arts.

He then started his career as an assistant director under the wing of Sanjay Leela Bhansali in Bajirao Mastani.  He was the body double of Ranveer Singh in Padmavat in 2016. Meezaan came into the glamour light of media after Sanjay Leela Bhansali announced about his debut in the film Malaal opposite Sanjay’s niece Sharmin Segal who also happened to be his ex-classmate.

The movie was made through the first time collaboration of T – Series and was directed by Mangesh Hadawale. Currently, he is doing a comedy film Hungama 2 with veteran filmmaker Priyadarshan which is the sequel of the super hit movie Hungama.