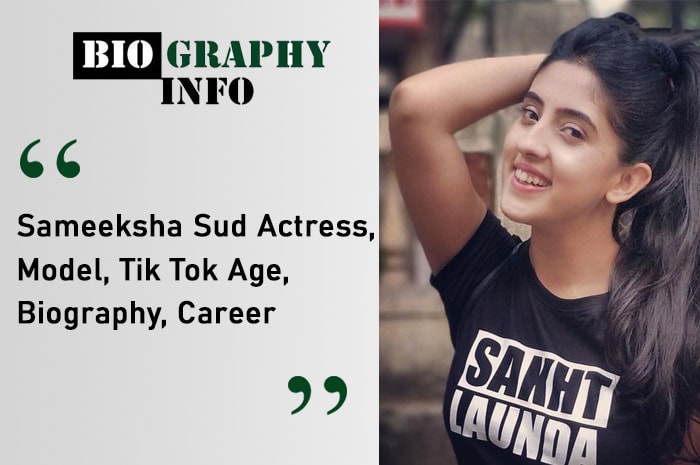 Sameeksha Sud ( born on 25th April 1993) is an Indian actress model and influencer who is famous for her Comedy based Tiktok Videos. She performs dance, comedy and lip-syncs on the app. She has earned the badge of Ace TikTok comedian and now is a crowned tiktoker. She made her acting debut with the TV serial Baal Veer in 2012.

Sameeksha Sud was born into a Hindu family in Delhi. Her father Naresh Kumar Sud is a government official and mother Radha Sud is a homemaker.

She completed her schooling from a private school in Noida and did her bachelor’s in Journalism and Mass Communication from Amity University of Noida, Delhi. The actress isn’t single but much is not known about her love life. It is rumoured that she and Vishal Pandey are dating.

Sameeksha started her career by appearing in television through her debut in the TV serial Baal Veer in 2012. She played the role of Dari Pari in the show. The show is one of the most popular TV shows in India for kids. The actor then moved ahead with her career as a Tiktok star. She earned the badge of an ace comedian and now is a crowned user. She is also a style blogger.

She also has appeared in the television serial Doli Armaano Ki in an important role. She met Vishal Pandey and Bhavin Bhanushali at an event organized by Tiktok in Surat. They opened a YouTube Channel in 2019 called Teentigada. The channel has around 883k subscribers and three groups of three have received their Silver button in 2020.

They have also appeared in the music videos – Raajhan Ve by Purva Mantri; Rula Ke Gaya Ishq by Stebin Ben, Sunny Inder and Kumaar; Tumhari Yaad Ayi Hai by Palak Muchhal and Goldie S; and Tu Bhi Royega by Jyotica Tangri, Vivek Kar and Kumaar. She has also appeared in shows like Fear files and Gumrah season 3. She has hosted Sanskrit Bharti on DD Bharti.

The actor works for NGOs for poor children. She is a part of the Samiksha Foundation which provides Facilities and takes care of children fighting cancer.