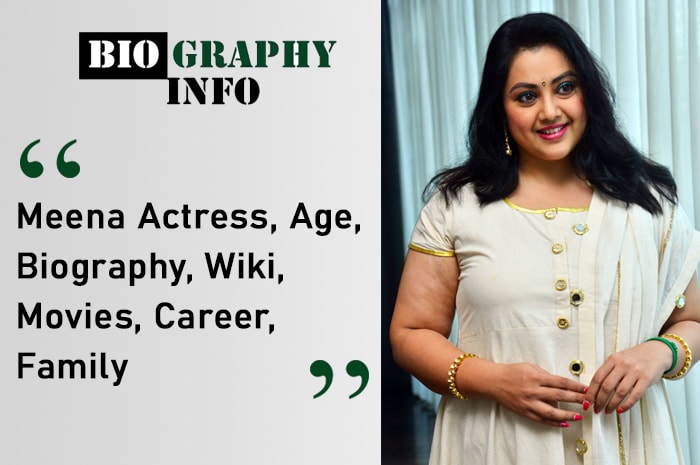 Meena (born 16 September 1976) is an Indian actress born in Chennai who primarily works in the South Indian film industry. Meena started her career as a child artist in 1982. She has appeared in a number of movies produced by several regional industries.

She has appeared in movies of number languages – Tamil, Telegu, Kannada, Malayalam and Hindi. The actress is one of the top leading South actress of the South from the ’90s.In addition to her acting career, she is also a dancer, model, singer, TV judge and dubbing artist.

Meena was born to Tamil father Durairaj and Malayali mother Rajamallika from Chirakkal Palace in Kannur district of Kerala. She studied in Vidyodhya School in Chennai till class 8 after which she has to discontinue her schooling and obtain private coaching and completed 10th in Vidyodaya schools in Chennai due to her tight schedule as a child artist.

She did her masters in History from the University of Madras through the open system in 2006. Meena is trained in Bharatnatyam and can speak Tamil, Telegu, Malayalam, Kannada, English and Hindi.

Meena married a Bangalore based software engineer, Vidyasagar at Arya Vysya Samaj Kalyana Mandapam on 12th July 2009. The couple later visited the Tirumala Venkateswara Temple in Andhra Pradesh and came back to give a reception party at Mayor Ramanathan Chettiar Hall, where leading South stars attended. The couple had a daughter on 1st January 2011 and named her Nainika Vidyasagar. Nainika made her acting debut opposite actor Vijay at the age of 5 in Theri (2016).

As a lead female artist, she made her Telegu debut with the film Seetharamaiah Gari Manavaralu. She won the Nandi Award for Best Actress from the Government of Andhra Pradesh for the film.

Meena has composed, sung and recorded two pop albums, 16 Vayathinile, and Kadhalism which she stared recording with actor Vikram in 2001. She has also been a playback singer for D. Imman in the movie Sena and sung the song “Indru intha kalayil en”, a super hit song.

Meena has dubbed for Cheran’s movie Pokkisham and has rendered voice for Padmapriya Janakiraman.