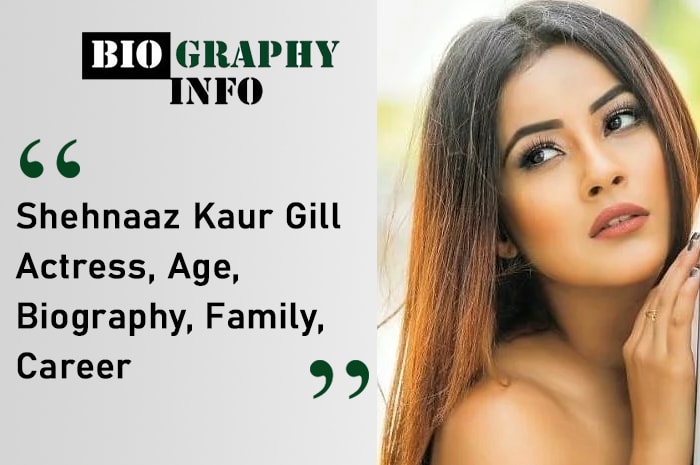 Shehnaaz Kaur Gill is an Indian, Punjabi actress, singer and model. She is famous for her roles in movies like Daaka and Kala Shah Kaala.

Shehnaaz appeared in the famous show Mujhse Shaadi Karoge on colour TV and also participated in Big Boss season 13 and ended up as the second runner up.

Shehnaaz is the daughter of Mrs Parminder Kaur Gill and Mr Santokh Singh Sukh. Shehnaaz was born in Beas, Amritsar. She completed her schooling from Dalhousie Hilltop School, Dalhousie and after which did her higher education from Lovely Professional University. Since her early days, she aspired to become an actress.

In her early days, Shehnaaz started as a model and appeared in various songs such as Majhe Di Jatti and Shiv Di Kitaab. She then went on to make her Punjabi film debut through the films such as  Daaka and Kala Shah Kaala.

In 2018 she did perform in Yeah Baby sung by Garry Sandhu.

In 2019 She participated in the famous TV show Big Boss season 13 and ended up as 2nd runner up.

In 2020 she performed in Mujhse Shaadi Karoge on Colour TV.

The audience of Big Boss greatly loved her, and she lasted a total of 140 days to end up as the 2nd runner up in the show. Her popularity increased when her name got attached to Sidharth Shukla and Paras Chabra.

There has been a controversy between her and Himanshi Khurana when during an interview, Himanshi asked her about the song she disliked the most, to which she replied: “I like it.”, which was sung by Himanshi herself. Things escalated from there, and there has been a lot of word wars between the two on various social media platforms like Instagram.

Not only this, but their fans are also battling it out on the twitter battlefield with their witty tweets, taking sides of their favourite actress.

She is also known as the Katrina Kaif of Punjab

Her daily routine includes going to the gym.

Her latest single ‘Veham’ has gained a lot of popularity among her fans and has also crossed over 50 million views.

She had a significant controversy with Himanshi Khurana during the time she was shooting for Big Boss season 13.