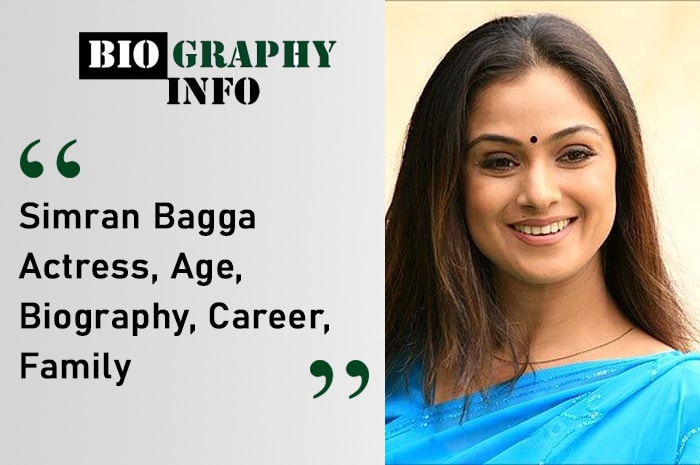 Simran Bagga (born 4 April 1976), is also known by just her first name Simran. She is an Indian film actress, producer and television personality who primarily appears in the South Indian industry and also in Hindi, Kannada and Malayalam language films.

Simran was to Punjabi father Ashok Naval and Punjabi mother Sharda in Mumbai. Originally named, Rishibhala Naval has two sisters – Monal and Jyothi Naval and a brother Sumith. She did her schooling from St. Anthony High School in Versova. The actress-producer got her degree of B.Com from Mumbai. Apart from being an actor and producer, she is also a trained dancer in Bharatnatyam and salsa. She can fluently speak – Tamil, Telegu, Punjabi, Hindi and English.

The talented celebrity married her childhood family friend Deepak in 2003. Deepak made a cameo in the film Kicha Vayasu 16. The duo has two sons, Ahdeep and Aadit. Being born in Mumbai she spent most of her life there. Although she initially aspired to become a fashion designer she got roped into the industry.

Simran wanted to become a fashion designer but later got several chances as a result of which she ended up getting into the film industry. She was the famous anchor of the show Superhit Muqabla during which she made her Bollywood debut with the film Sanam Harjai (1995).

She had acted in a few Bollywood films after which she received her success with the film Tere Mere Sapne (1996). After that, she made her South Indian cinema debut with the Malayalam film Indraprastham in 1996. She did her first Kannada film with Simhada Mari and her first Telegu film Abbai Gari Pelli in 1997. In 1997 she also made her Tamil debut with the film V. I. P. and this was followed by a number of commercial hits in her early career.

She did a number of hit films like – Thulladha Manamum Thullum (1999), Vaali (1999), Samarasimha Reddy(1999), Kalisundam Raa(2000) Parthen Rasithen(2000), Priyamaanavale(2000), Narasimha Naidu(2001) Kannathil Muthamittal(2002) for which she won her first Filmfare Award for Best Tamil Actress and New(2004) for which she won the Filmfare Best Telegu Actress. Following her marriage with Deepak, she left the industry.

In 2008 Simran made her comeback with the Tamil film Vaaranam Aayiram and won the Filmfare award for best-supporting actress. In June 2018 she signed for Petta and played opposite Rajnikanth. Her acting career spans from 1995, through which she has done 93 films.

After her marriage, she appeared on the small screen in the serial Simran Thirai, Sundarakanda (2009), Agni Paravai. She hosted a Jackpot show in 2012. She was one of the judges in Dance Tamizha Dance.