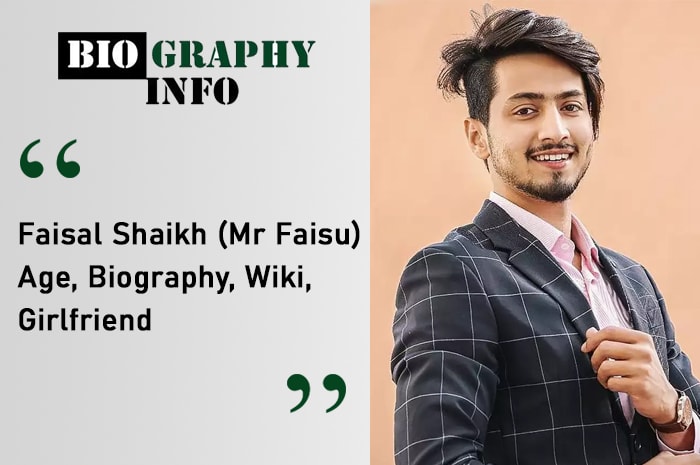 Faisal Shaikh is a popular Tiktok star, model, actor and social media star. He rose to fame after he posted a video on Tiktok with his team “ Team 07”. Later he also opened his own Tiktok where he posted his own lip sync videos. In 2020, he also opened his YouTube Channel called Mr Faisu and posted his first video “Exploring Shillong” on 14th May.

He belongs to an extremely strict Muslim family and maintains a distance between his family the media. He often posts pictures with his family which indicates a close relationship. He is the founding member of Team 07 in 2018.

Previously, there was a rumour about him dating fellow Tiktok star Jumana Khan during his starting years in Tiktok. But it was evident that the couple broke off eventually. Presently he is rumoured to be dating Television Actor Jannat Zubair Rahmani. Jannat is also on Tiktok and has a massive fan base there. The duo is often seen posting pictures with each other on their social media accounts.

In 2019 the whole Team 07 got into a big controversy due to their Tiktok video which they made after the lynching of Tabrez Khan in 2017. They said a statement that meant if Tabrez Khan’s son grows up to take revenge for his father’s death it should be told as an act of terrorism.

This sparked hate speech and one of the activists Shiv Sena filed a complaint against Team 07. This was followed by court proceedings and suspension of the accounts of Team 07. After the incident, the members said sorry for their actions and their account was also put back after some time.

In 2020, when Carry Minati posted a video talking about Tiktok and YouTube the whole Team 07 responded back with a soft speech telling that neither platforms are to be deemed and no platform is bad it’s only some people that make it happen otherwise individually. The blow they received in 2019 seems to have made them be cautious at this point. They are trying their best to stay out of controversies.

Faisal Shaikh is one of the most popular Tiktok creators in India. He started his influencer career back in 2018 when he formed the group Team 07. Team 07 is a group formed by Hasnain Khan, Adnaan Shaikh, Faiz Baloch and Shadan Farooqui. Their first video came up on Tiktok in 2018 after which Faisu himself opened his own account.

He became one of the top Tiktok stars in a very short time. He makes lip syncing, comedy, dance, fashion and several other types of videos. He launched his own deodorant line called 2407 Crush in 2019. He also posted his first video on his own  YouTube Channel Mr Faisu “Exploring  Shillong “ on 14th May 2020. He has also started his own business the same year.