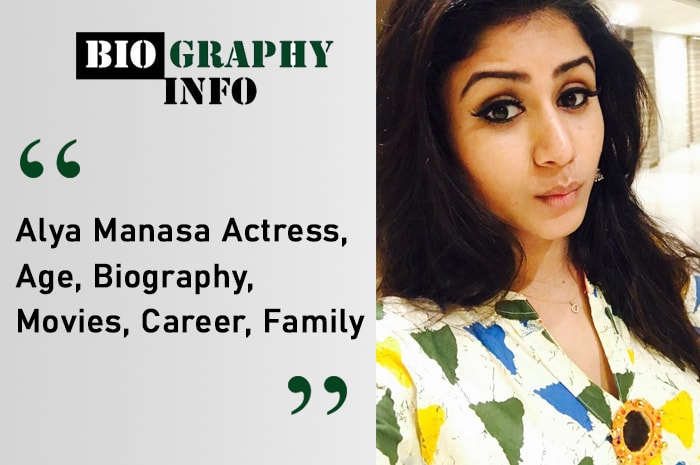 Alya Manasa (born on 27th May 1992) is an Indian film and Television actress who predominantly works in the Tamil film industry. She came into limelight after participating in the dance reality show Maanada Mayilada season 10 in 2017.

After that, she entered into the industry as a television actress in 2017.

Alya Manasa was born in Chennai, Tamil Nadu in 1992. She completed her schooling from Campion Anglo Indian Higher Secondary School in Tiruchirapalli. The actor has a younger sister Janani Manasa.

She completed her higher education from Ethiraj College for Women in Chennai. Alya is a dance lover and has participated in several dancing competitions while in school and also won several awards for dancing.

Alya was in a relationship with Choreographer Manas Sathish when she participated with him in the dance reality show Maanada Mayilada season 10 in 2015. After that, the duo broke up due to personal complications.  After that in 2017, she started dating actor Sanjeev Karthick whom she met during her serial Raja Rani.

After the completion of her schooling and receiving a degree. Alya formally studied dance and later on became a dance teacher for crew members.  Then she initially entered into the industry in 2015 with the dance reality show Maanada Mayilada season 10 with ex-boyfriend Manas Sathish which telecasted in Kalaingar TV.

After the show, she was called upon by director Praveen Bennett to act in a serial. The serial Raja Rani started to telecast on 29th May 2017 on Vijay TV.

The serial was produced by Venkatesh Babu and became a hit. Sanjeev was the lead opposite Manasa. After that she also got her to break with the Tamil film Julieum 4 Perum in 2017. Since then she has done a game show and two other Shows in Vijay TV.