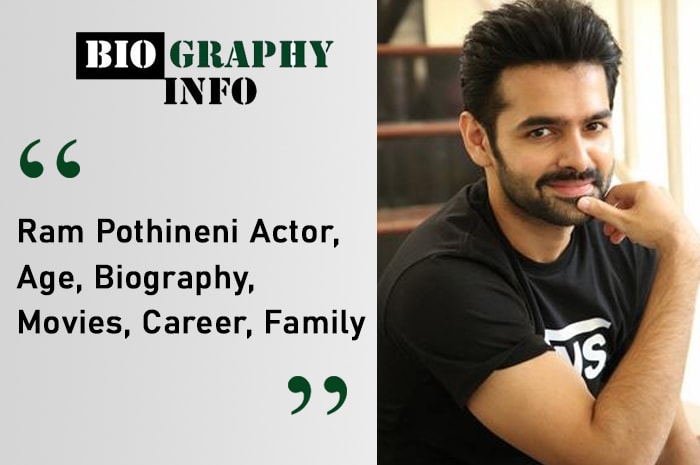 Ram (born on 15th May 1988) is an Indian film actor known for his Telegu film works. He is the nephew of film producer Sravanthi Ravi Kishore. Ram made his debut in 2006 with romance comedy Devadasu, which became a blockbuster at the box office. The actor won Filmfare Award for Best Male Debut-South for the film.

Following the film, he rose to prominence with critical and commercially successful films such as Ready in 2008, Maska in 2009, Kandireega in 2011, Pandaga Chesko in 2015, Nenu Sailaja in 2016 and iSmart Shankar in 2019.

Ram Pothineni is the son of Murali Mohan Pothineni and Padmasree. He was born in Hyderabad, Telangana in India. He is the nephew of Sravanthi Ravi Kishore. He did his schooling from Chettinad Vidyashram in Chennai, Tamil Nadu. He has a brother named Krishna Chaitanya Pothineni and sister Madhu Smitha Pothineni.

He is popularly known as the Energetic star. He is a Taurus and was born on 15th May 1988 in a Hindu family.

Ram started his acting career in 2002 with a Tamil short film Aadayalam and won Best actor in European movies festival. The producer and director of the film were awarded Notable film in New Jersey Art Film Festival.

Further, he auditioned for the lead role in Kaadhal. He made his debut in 2006 with Devadasu and the film went on to become a blockbuster in the box office running for 175days in over 17 centres and completed 205 days in Hyderabad Odeon 70mm theatre. His second film was Jagadam opposite Monalisa and was directed by Sukumar but then did not bring success in the box office. He then appeared in Ready alongside Genelia D’Souza.

The film was directed by Seinu Vaitla and became a huge success.  In 2009 he has two releases, Maska and Ganesh Just Ganesh. In 2010, the actor had only one release Rama Rama Krishna Krishna produced by Dil Raju and directed by Srinivas. His next film Kandireega was a blockbuster of 2011.

His next release was Endhukante Premanta with Tamannaah and was directed by Karunakaran and produced by Sravanthi Ravi Kishore. The movie turned out to be an average grosser. In 2013 he had another release with Kriti Kharbanda and directed by Bhaskar, Ongole Githa. The movie was produced by B.V.S.N. Prasad.

He then did Masala, Hindi film Bol Bachchan, Pandaga Chesko, Shivam and Nenu Sailaja. His next film was Hyper and was released on 30th September 2016 and directed by Santosh Srinivas. It was produced under 14 Reels Entertainment. It was an average grosser.

In 2017, he did Vunnadi Okkatey Zindagi, produced by Sravanthi Ravi Kishore. The film received good reviews. In 2018 he appeared in the film Hello Guru Prema Kosame directed by Trinadha Rao Nakkina.

Then in 2019, he starred in his career’s biggest hit iSmart Shankar directed by Puri Jagannath where he played a Hyderabadi alongside Nidhi Agerwal and Nabha Natesh which completed fifty days theatrical run.