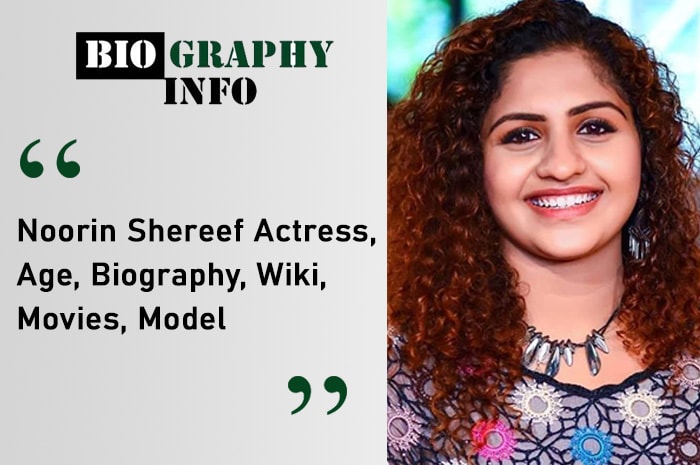 Noorin Shereef ( born on 3rd April 1999)  is an Indian Model and actress who is seen mainly in the Mollywood industry. Apart from being a model and actress Noorin is also a trained dancer. Noorin is a fitness enthusiast. She has been crowned the Miss Kerala Fitness in 2017. Along with the title came immense popularity and fandom.

Noorin Shereef was born in Kundara in Kollam which is in Kerala. She was born to the family of Malayalam speaking Muslim family to parents Shereef and Haseena Shereef.  Her father AR Shereef is a businessman and her mother Haseena is a housewife.

The actor did her schooling from TMK Centenary Public School and is in TMK College for higher studies.  She is currently pursuing graduation and is in the third year of her graduation.

Noorin Shereef started her career in the industry when she participated in Miss Model and Fitness Kerala in 2017. She bagged the award for the pageant which was organized by Aurora Industry.  She competed in the contest with twenty-five other participants. The pageant helped gain a lot of attention and fandom. Her first film was Chunkzz and her second film was Oru Adaar Love which was a super hit blockbuster.

Oru Adaar Love was a venture where she acted along with two other debutantes Roshan Abdool Rahoof and Priya Prakash Varrier. Oru Adaar Love was produced by Omar Lulu who gave Noorin Shereef the chance to work in the film. Surprisingly both her films got a huge collection in the box office.

The first song of Oru Adaar Love got viral on YouTube with 25 million views in the first week itself and got shared in all social media platforms. She had a decent part in the film and a small role in the song.

The hit of the song was as a result of a part where Priya Prakash Varrier winked and dance her eyebrows which caught huge attention across media. She was declared the social media crush of the year. Noorin is an outstanding dancer and has bagged several awards of it.

Movies have done by Noorin