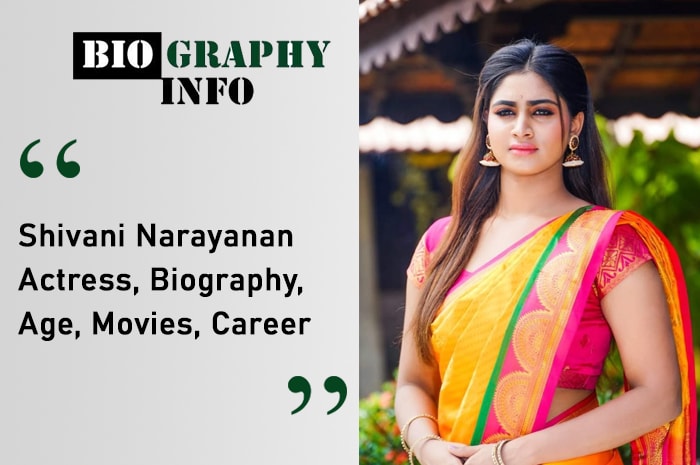 Shivani Narayanan (born on 5th May 2001) is an Indian Actress and Model. She primarily works in Tamil Television serials. She started her career at the age of sixteen. She rose to fame after playing the lead role of Sneha in the TV serial Pagal Nilavu. She has partnered with Chennai based mega-brands as a model.

Her interests in the entertainment industry led her to start her career in modelling when she was completing her higher studies. Shivani is the daughter of Mr Narayanan (father) and Akila Narayanan (mother).

She plays lead roles as heroines in serials telecasted in the Tamil language which are telecasted on weekdays. Shivani Narayanan is a notable celebrity in social media handles like Dubsmash and musically.

Shivani was born in Manali, Chennai, Tamil Nadu, India to father Narayanan and mother Akila Narayanan.  She belongs to a Hindu Brahmin family.  Her father Narayanan is a wealthy businessman and her mother is a homemaker.

She did her schooling from a school in Chennai and also completed her higher studies there. She passed her 12th exams recently. She has wanted to become an actress since her childhood days. She started doing modelling when she was in high school.

Due to her interest in modelling and fitness, she follows a strict diet plan which is monitored by her parents. She follows the Hindu religion and is a great believer of God. She did her schooling from Chennai, Tamil Nadu, India. Due to her acting profession, Shivani had to quit her studies. Her highest qualification is 12th Standard.

Shivani is quite secretive about her personal life and doesn’t quite talk about her relationships in the media. She is presently single and any of her past relationships isn’t disclosed by her.

Shivani Narayanan started her modelling career at the age of fourteen while she was still in high school. She did several video commercials and brand advertisements. She started participating in city-level beauty pageants and fashion events. From there, she earned huge fame.  In 2016, she appeared for the first time on television as Gayathri in Saravanan Meenatchi Season 3, as a cameo appearance along with Rio Raj which was directed by Praveen Bennett and produced by Syed Anwar Ahmed.

After that, she made her television debut through a serial on Star Vijay Channel titled Pagal Nilavu. She played the lead character of Sneha in the serial. She played in the lead role opposite Mohammed Azeem. Their characters were hugely applauded and became the most popular couple on Star Vijay Television. She also acted with well-known actors such as Mohammed Azeem, Vignesh Karthick, Mithun Raj and Karan Sagar.

She participated in the reality dance show Jodi Fun Unlimited along with her Pagal Nilavu serial pair Mohammed Azeem.  She was replaced by actress Iraa Agarwal in the Kadaikutty Singam series. She was seen playing the character of Meenakshi on the show. She currently plays a leading role in Rettai Roja serial along with Akshay Kamal in Zee Tamil. Other than that she currently is pursuing her modelling career and partnered with Chennai based mega brands.