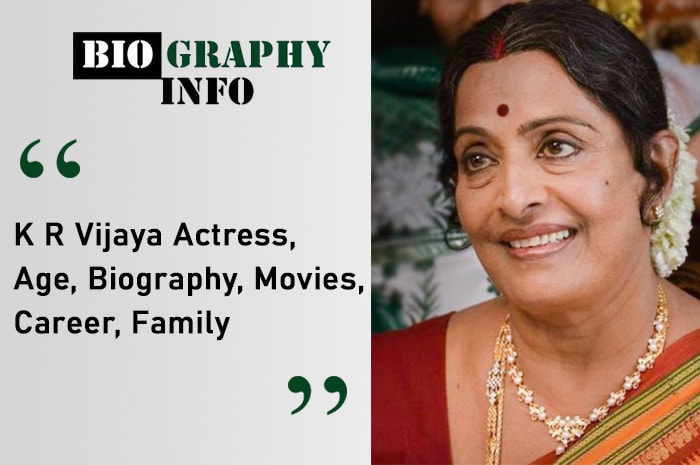 K R Vijaya was born as Deivanayaki in 1948. She is an Indian actress who has done Tamil, Malayalam, Telegu, Kannada and Hindi language films. The actress started her career in the 1960s. She has acted for more than six decades in the South Indian film industry. The star has worked with almost all the legends of the South Indian cinema and has acted in about five hundred movies.

She did her schooling from Government Higher Secondary School at Thrissur. The actor’s father always wanted her to be an actress as he himself was acting in M.R. Radha’s drama troupe after his retirement from the army. She made her dut with the film Karpagam in 1963. She was the first actress to ever own a private jet.

The actress married a businessman named M. Sudarshan Velayudhan in 1966. He was the CEO of Sudarshan trading company and a movie producer.  The couple has a daughter together named Hemalatha in 1967. The couple were together until Velayudhan’s demise on 26th March 2016, aged 82.

K.R. Vijaya made her debut in 1963 with the lead role in the film Karpagam directed by K.S. Gopalakrishnan. The director also was the director of her 100th film Nathayil Muthu.

She has done almost four hundred films in all South Indian language films, including 100 films each in Tamil, Malayalam and Telegu. The actor has done half a dozen films in Kannada and one in Hindi, Oonche Log in 1965.

Her Hindi movie debut had two other stars – Raaj Kumar and Feroz Khan. She has acted in a bunch of successful movies. She starred opposite M.G. Ramachandran and played supporting roles in Naan Aanaiittal. The actor acted opposite Sivaji Ganesan and did successful films like Kai Koduttha Dheivam, Saraswati Sabatham etc. She also acted opposite Muthuraman in films like Thozhilali, Kanni Thaai etc.

The actress stopped acting temporarily in movies in 1994 when her husband suddenly fell sick and made a comeback in television and continued till 2007. After her husband’s death in 2016, she became active in both movies and television.