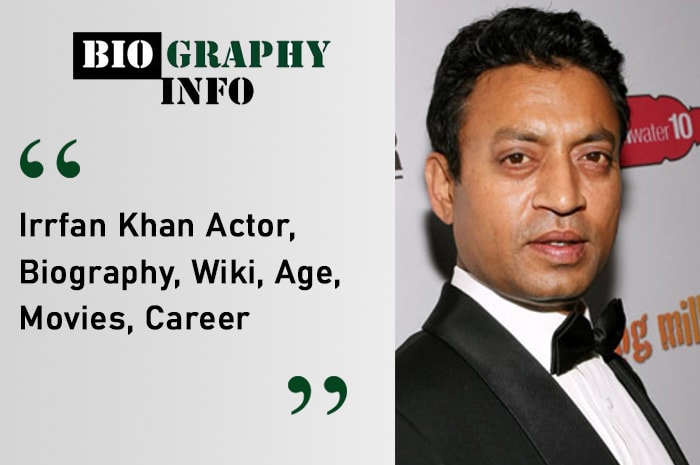 Irrfan Khan born as Sahabzade Irfan (on 7th January 1967) was an exceptional actor and artist you will find in this generation of glamorous-grand Bollywood. Let alone the Bollywood, he was an artist who could portray emotions in the mere movement of his eye and face. He was and will forever be known for his exemplary work in Hindi, British and American industry of entertainment.

His career of 30 long years is one where we find hard work, struggle and integrity. He has bagged numerous awards for his performance including a National Film Award, an Asian Film Award and four Filmfare Awards. He is also the receiver of India’s fourth-highest civilian award – The Padma Shri in 2011.

Irrfan Khan was born in Rajasthan to a Muslim family of Pathan ancestry. His father Yaseen Khan Ali and mother Sayeeda Begum belonged from Khajuriya village near Rajasthan’s Tonk district. His father ran a tire business. He has two brothers – Salman Khan and Imran Khan and a sister named Rukhsana Begum. Imran was a talented sportsman and was selected to play in the CK Nayudu Trophy for emerging players in the under 23 category.

The tournament is considered as a stepping stone to first-class cricket in India. However, he couldn’t go on with his passion for cricket due to lack of funds. He completed his Masters in Jaipur before joining the National School of Drama in New Delhi in 1984. Anupam Kher was his senior in the academy where he went to study acting.

Irrfan had been dating classmate from National School of Drama since a very long time and finally married Writer Sutapa Sikdar in February 1995. They have two sons named Ayaan Khan and Babil Khan together.

In 2012, he changed his name to Irrfan from Irfan, owing to the fact that he liked the sound of the extra r his name. After some time he also dropped Khan from his name saying that he wanted his work defining him rather than his lineage.

As they say “God takes the precious sooner”, the talented actor was diagnosed with a neuroendocrine tumour in 2018. He sought treatment in the UK for one year and returned to India in February 2019.

On 28th April 2019, he was admitted to Kokilaben Dhirubhai Ambani Hospital in Mumbai, Maharashtra, India where he started receiving medical treatment for a colon infection. However, the legendary actor couldn’t be saved and died on 29th April 2020 at the age of 53 from the infection.

With him, he took away a ton of talent from the cinema and left a million broken hearts. Then again he also left in a form of art. 4 days earlier his mother had passed away and he saved his mother the pain of the loss of a child by waiting for her passing, who knew he would too follow his mother leaving a void in the world of cinema.

Initially, Irrfan started as a cricketer but due to his lack of funds, he couldn’t go through with it. After that, he got his degree and moved to Mumbai where he acted in numerous TV serials including Chanakya, Bharat Ek Khoj, Sara Jahan Hamara, Banegi Apni Baat, Chandrakanta, Shrikant, AnooGoonj, Star Bestsellers and Sparsh.

He made his debut with a small role in Salaam Bombay! (1988) and then went through years of struggle with unsuccessful films which went unnoticed. After that, his spark in the cinema started with a British film called The Warrior in 2001. He then had his breakthrough with starring roles in the dramas Haasil (2003) and Maqbool (2004).

His highest-grossing Hindi film release came with the comedy-drama Hindi Medium in 2017, for which he won The Filmfare Award for Best Actor.  His final appearance was in its sequel Angrezi Medium in 2020. As of 2017, his films have grossed $3.6 billion in the worldwide box office. He was described by Peter Bradshaw of the Guardian as “ a distinguished and charismatic star in Hindi and English language movies whose hardworking career was an enormously valuable bridge between South Asian and Hollywood cinema.”

In September 2015, he was appointed as the Brand Ambassador for Resurgent Rajasthan, a campaign by the state government of Rajasthan. He lent his voice to the light and sound show at the war memorial for the Indian Army at Vidhan Sabha Road, Jaipur. The show portrayed the valour and courage of Rajasthani soldiers and their historical and modern triumphs in battle.

Movies as an actor