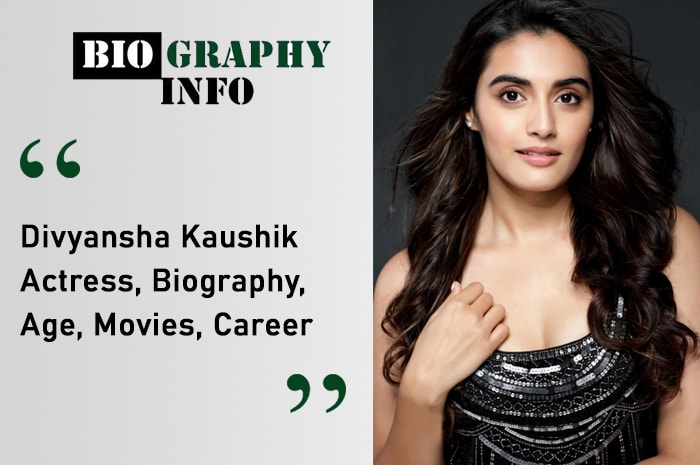 Divyansha Kaushik (born on 10th February 1997) is an Indian actress and model who primarily works in the South Indian cinema. She made her film debut with the Telegu film Majili alongside Naga Chaitanya and Akkineni Samantha which was directed by Shiva Nirvana in 2019.

known makeup artist, Anju Kaushik. Her mother has worked with various well-known celebrities of Bollywood. She has an elder sister named Garima Kaushik. Garima helps her mother in the makeup studio.

She did her schooling from The Shri Ram School and did her high school from Missouri  International School. She stayed in a boarding school during her high school days. Divyansha Kaushik was inspired to become an actress by her mother.

After she completed her high school she went to Mumbai in order to pursue better opportunities in the industry. She worked for Yash Raj Studios in the Casting and Film Making Department. She gradually became familiar with the working of the industry.

Divyansha Kaushik has always been private about her relationships to the media. However, it is suspected that she is in a relationship with a man from Delhi whose name is not yet known. We can only hope that the young actor stays happy and soon share the happiness with us.

Right after her high school graduation, Divyansha Kaushik decided to move to Mumbai in order to pursue better opportunities.  She started working with the Yash Raj Studios in the Casting and Film making Department in order to better understand the working of the Industry.

She had already done modelling assignments when she was in school. Soon, she got approached for a small project named A Silver Lining. However, the short movie did not get good reviews and became a commercial failure. It was during this time that she decided to move on with the South Indian film industry.  She started taking Telegu language classes.

In 2019, she made her Debut with the Telegu film Majili alongside Akkineni Naga Chaitanya, and Akkineni Samantha and the movie was directed by Shiva Nirvana. The movie got excellent reviews and also did well in the box office. Divyansha Kaushik got a lot of appreciation for her acting skills. Later in 2019, she also made her Tamil debut with the Film Takkar.

She acted alongside Siddharth, Yogi Babu and Abhimanyu Sigh. The film was directed by Karthick G. Krish.