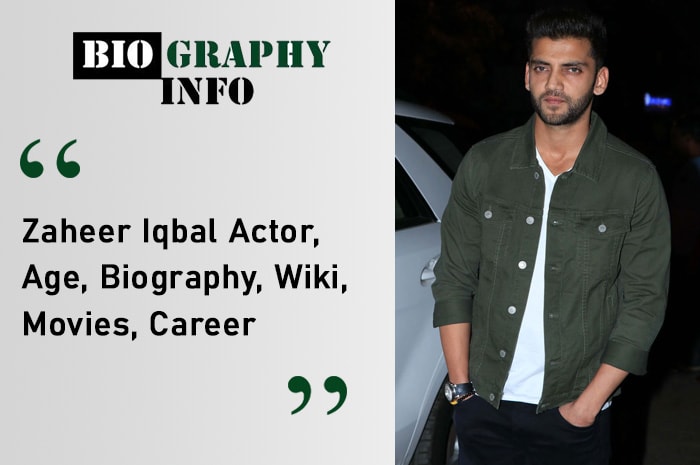 Zaheer Iqbal (born on 10th December 1988) also known as Zaheer Ratnasi is a debutante in the Bollywood film industry. He was introduced into the cinema with the help of Salman Khan who also happens to be his father’s childhood friend. Zaheer had groomed himself along with the support of Salman Khan for six years before his big-screen debut.

His debut film is alongside debutante actress Pranutan Bahl. The film is co-produced by Salman Khan. The film is in collaboration with the producers of another Bollywood film, Mubarakan. His debut film, Notebook was released in 2019.

Zaheer Iqbal was born in Mumbai to an upper-class Muslim family of jewellers. His father Iqbal Ratnasi is the close friend of Salman Khan. Zaheer has one younger brother and an older sister.  Zaheer used to visit Salman in his sets during his childhood and aspired to become an actor. It was in his sister’s Sangeet ceremony that Salman spotted him while he was performing a dance number at the ceremony.

Salman decided to launch him in his film. From then on he started his grooming under Salman Khan and did Gymnastics and several dance forms for six years until he was all set to make his Bollywood debut. Prior to the film announcement, Salman posted a photo of themselves several years back saying that he would reveal his first look the next day. His sister is a celebrity stylist.

Zaheer was rumoured to be in a relationship with childhood friend and classmate, Deeksha Seth who made her debut opposite Ranbir Kapoor’s cousin Armaan Jain in Lekar Hum Deewana Dil and later moved ahead with South Indian cinema. Currently, Zaheer is dating the child artist of Kuch Kuch Hota Hai who last appeared in a supporting role in Karan Johar’s Student of the Year, actor and model Sana Saeed.

Zaheer Ratnasi was first spotted by Salman Khan while performing a dance number at his sister’s Sangeet.  Since then till six years he prepared for his role in the movie Notebook.  He took special training in gymnastics and several dance forms under the guidance of Salman Khan.

He started his career as an assistant director of the film Jai Ho. In 2019 he made his Bollywood debut as an actor in Salman Khan’s production,  Notebook opposite debutante actress and lawyer Pranutan Bahl who is the granddaughter of famous actress Nutan.

The movie as an assistant director

The movie as an actor