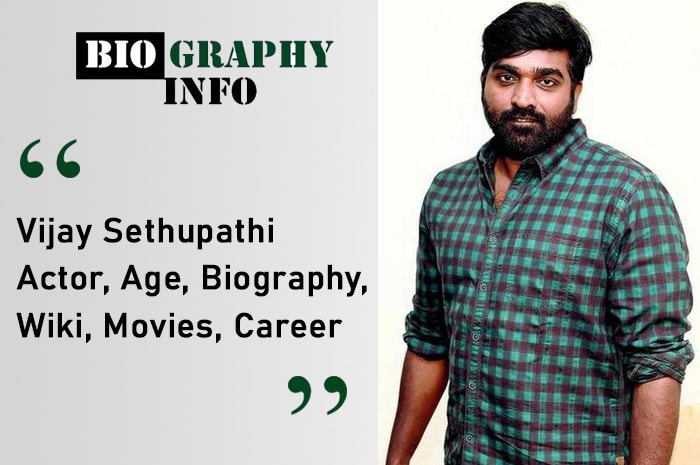 Vijay Sethupathi (born on 16th January 1978) is ab Indian film producer,  actor, lyricist and dialogue writer who works in the South Indian film industry primarily. He started with his film career as a background actor and played minor roles for over five years.

He played his first lead role in Seenu Ramaswamy’s  Thenmerku Paruvakaatru in 2001. He has starred in more than thirty films over the years and transformed into a popular Indie Film star in the Tamil cinema.

Vijay Sethupathi was born and brought up in Rajapalayam until he was in sixth grade when he moved to Chennai. He used to live in Ennore in North Chennai. He attended the MGR Higher Secondary School in Kodambakkam and Little Angel’s Mat HR Sec School.

According to him as a student he was a below-average student and was neither interested in extracurricular or sports. He graduated with a Bachelor of Commerce degree from Dhanraj Baid Jain College which was affiliated of the University of Madras in Thoraipakam.

During the beginning of his career, he had to take care of three siblings and so he moved to Dubai for better pay than what he received in India. He stayed there for two years. During his two years stay, he met a woman named Jessie, online.

The duo dated, eventually marrying in 2003. He has a son named Surya and a daughter named Shreeja. He named his son in remembrance of his childhood friend who died during his school years. The actor is an atheist and expresses his views in speeches.

Vijay did a number of jobs for pocket money such as salesman at a retail shop, a cashier at a fast-food joint and as a phone boot operator. A week after finishing college he joined as an accountant assistant at a wholesale cement business. Then he moves to Dubai since he would receive four times more pay than what he received in India.

After two years unhappy with his job he returned back to India in 2003. He did a brief stint in an interior decorating business with his friends and then he moved to join a marketing company that dealt with readymade kitchens. During that time he recalled director Balu Mahendra remarking him to have a photogenic face and this motivated him to pursue an acting career.

He subsequently joined the theatre group Koothu-P-Pattarai as an actor and accountant in order to observe the actors from a close range. He then started doing background roles as the lead’s friend.  He also acted in television series particularly Penn that began in March 2006.

He then went on to do a number of films as a minor artist before gaining fame as the negative character in the film Subdarapandian. He then was appreciated for films like Pizza and Naduvula Konjam Pakkatha.

He then went on to do a number of films with actors like Dhanush, M. Sasikumar, Chiranjeevi and Rajnikanth. In 2019 Film Companion ranked his performance in Aandavan Kattalai among top 100 Greatest Performance of the Decade.

In 2014, Chennai Mayopathy Institute of Muscular Dystrophy and Research Centre organized a rally on 3rd August in Marina Beach to raise awareness about Muscular Dystrophy. Vijay took part in the rally along with other actors like Gayathrie and Varalaxmi Sarathkumar.

Works as an actor