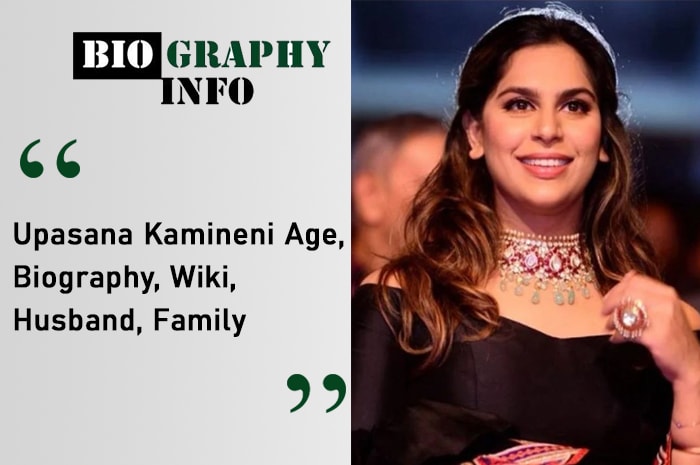 Upasana Kamineni or Upasana Kamineni Konidela ( born on 20th July 1989) is an Indian entrepreneur and Vice-Chairperson of Apollo Life. She is the Editor-in-chief of B Positive Magazine as well.  Her husband is the famous actor Ram Charan.

Upasana Kamineni was born in Hyderabad, Telangana, India. Her father Anil Kamineni is the Founder of KEI Group ( a diversified logistics, leisure and infrastructure business) and her mother Shobana Kamineni is the President at Confederation of Indian Industry and the Executive Vice Chairperson of Apollo Hospitals. She has a brother named Puansh Kamineni and a sister named Anushpala Kamineni.

She wanted to become a Fashion designer as a child but later realized her love for their family business. She went to London to get her Degree in International Business Marketing and Management at Regent’s University in England.

She was extremely fat during as a teenager but lost weight during her college days through regular exercise and a healthy diet. She loves animals and believes in loving and respecting them as equals.

Upasana met Ram Charan through common friends at a sports club during her time in London. They both became friends after that and soon developed Love for each other. Later they both decided to get married. On 14th June 2012, they got married at the Temple Trees Farm House in Chennai, Tamil Nadu, India.  She is the daughter of the law of the famous South Indian Actor Chiranjeevi.

Upasana got her degree in International Business Marketing and Management from Regent’s University, London, England, United Kingdom.  Initially, she wanted to become a fashion designer but soon decided that she loved her family business more.

She is a Philanthropist and started the movement called “U Exchange” as a student. She used to collect old textbooks and notebooks to give to the children in Naxal areas. She has launched JIYO App with Deepak Chopra, an Indian born American Author and medical advocate. The app tracks stress and wellness levels of an individual and them send them a wellness prescription.