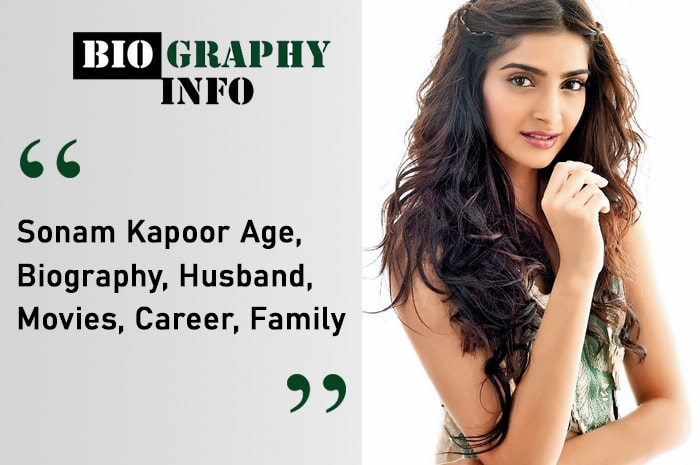 Sonam Kapoor Ahuja (born on 9th June 1985) is an Indian film actress and model. She made her Bollywood debut with the film Saawariya in 2005 which was directed by Sanjay Leela Bhansali. She is the daughter of famous actor Anil Kapoor. From 2012 – 2016 she appeared in Forbes India’s Celebrity 100 list based on her popularity and income.

Sonam Kapoor was born in Bombay suburb of Chembur. Her father is a famous actor and producer Anil Kapoor. Her mother Sunita is a former model and designer. She has two younger siblings – a brother named Harshvardhan, who is an actor and a film producer sister named Rhea.

She lived in the suburbs of Juhu for one-year-old. She did her schooling from Arya Vidya Mandir School in Juhu, Mumbai, Maharashtra, India. She was a carefree child and would often bully boys at her school. She was also good at playing rugby and basketball.

Kapoor is trained in Kathak, Latin dance and classical music. She went to the United World College of South East Asia in Singapore to study theatre and arts. She later started courses in economics and political science through the University of Mumbai in Correspondence after coming back from the University of East London where she initially started her courses.

Rani Mukherji was a family to their family. In her earlier days, she never gave thought towards becoming actress due to overweight and instead wanted to become a crew member of films.

Like any other celebrity of Sonam hasn’t failed to get the attention of lovers all around her. She dated Entrepreneur and Model Sahir Berry during her days as a model. However, their relationship ended once they both chose different paths in their lives ahead.

After some time she dated Director Punit Malhotra, their relationship lasted quite long but didn’t go well in the end and they called quits. In 2018, there was a rumour about her dating a friend who is an entrepreneur Anand Ahuja.

The rumour soon was revealed to be true by the actor. They were often spotted hanging out together on several occasions. They finally tied their knot on 8th May 2018. Their wedding was a glamorous event attended by most of the big stars of Bollywood in Rockdale, Bandra, Mumbai, Maharashtra.

Their wedding was a complete Sikh style wedding and continued for two whole days that involved Sangeet, mehndi and a grand reception.

Sonam Kapoor began her career in 2004 as an assistant director of Sanjay Leela Bhansali’s film Black ( 2005). Later on Sanjay Leela Bhansali’s motivation, she lost her weight to make her acting debut in 2007 with Saawariya opposite of Ranbir Kapoor. It was a box office failure. She gained her first box office success with the film I Hate Love Stories in 2010 opposite Imran Khan. It was followed by a series of flops.

2013 marked her turning point in a career with the Box office hit film Ranjhaana along with Dhanush. She had her biggest commercial successes with supporting roles in Bhaag Milkha Bhaag in 2013 and Sanju in 2018. Her film in a lead role Prem Ratan Dhan Payo in 2015 was also among her hits.

Her portrayal of Neerja Bhanot in 2016 won her the National Film Award and a Filmfare Award.  Her female lead film Veere Di Wedding ranks among the highest-grossing female-led Hindi films.

Other than that she is also a philanthropist.  She supports the awareness of breast cancer and LGBT rights. She is frequently credited as one of India’s most fashionable celebrities. She appeared in the song Dheere Dheere Se in 2017 along with Hrithik Roshan whose profits were donated to charity. She also speaks for widows, orphans and animals (through PETA).

As an assistant director