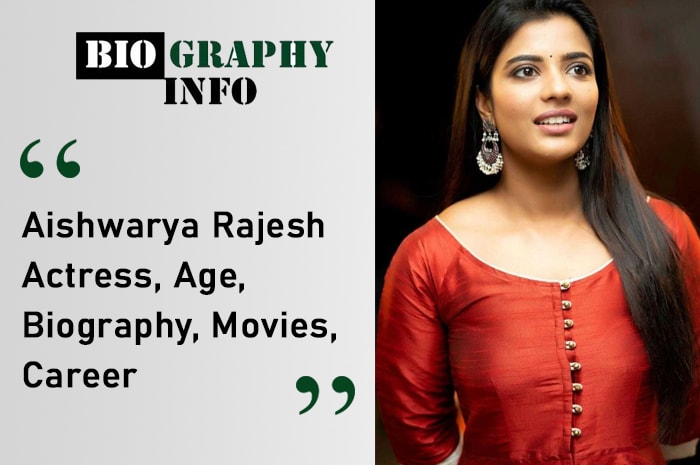 Aishwarya Rajesh (born on 10th January 1990) is an Indian film actress who primarily appears in Tamil, Telegu and Malayalam films. She has also appeared in the Hindi film Daddy in 2017. She made her debut with the film Neethana Avan(2010). She started her career by appearing as a competitor in a comedy show on Sun TV, Asathapovadhu and a reality show Maanada Mayilada. She has won the Tamil Nadu State Film Award for Best Actress in 2014 for Kaaka Muttai.

She was born in 1990 in Chennai. She did her schooling in Shrine Vailankanni Senior Secondary School and Holy Angela Anglo Indian High School in T. Nagar, Sree Vidyaniketan Tirupathi. She studied in Ethiraj College for Women, Chennai and passed with a Bachelor of Commerce. She is the daughter of the famous Telegu actor Rajesh who has appeared in over 54 films.

Her grandfather Amarnath was a popular lead actor and producer and her Aunt is Srilakshmi who is also an actor who does comedy and has acted in over 500 films. She has had learned the dance in order to choreograph a function and later participated in a dance reality show from where she received recognition and was offered several film roles.

Aishwarya started her career as compere in a comedy show called Aasthapovadhu Yaru on Sun TV.  She won a dance reality show called Maanada Mayilada after which she made her debut with the film Neethana Avan in 2010. She came into prominence with the movie Attakathi in 2012 where she played the role of Amudha.

Her first Malayalam movie was Jomonte Suvisheshangal opposite of Dulqer Salmaan and also acted with Nivin Pauly in her second Malayalam film Sakhavu. She was selected by Arjun Rampal to play the critical role in Daddy and hence marked her debut in Bollywood in 2017. She made her career breakthroughs with the films Vada Chennai and Kanaa. She received numerous awards for the film Kaaka Muttai in 2014. Her movie World famous Lover and Namma Veettu Pillai is also appreciated a lot.

In the early stages of her career, she also worked as an anchor on TV sets and was a very warm and charming host of the Aasthapovathu Yaaru. She was seen alongside Vijay Sethupathi in Rummy and Pannaiyarum Padminiyum.

In 2020 she is working on several projects. She has filmed for Idam Porul Yaeval and Dhruva Natchathiram.