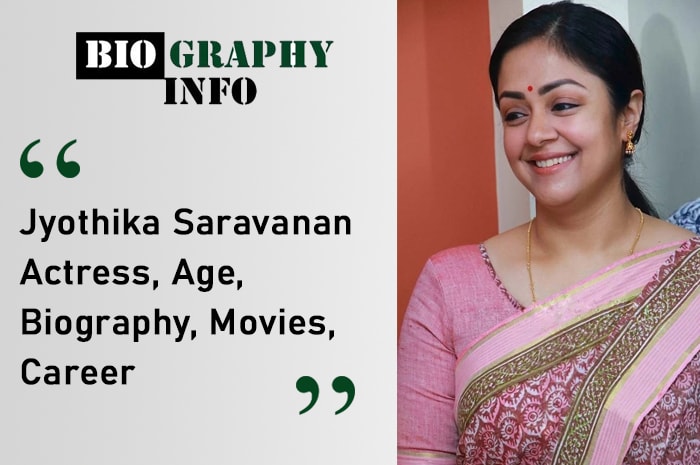 Jyothika Saravanan (born on 18 October 1977) is an Indian actress who primarily is seen in Tamil movies. However, she has also done movies of other south Indian languages such as Telegu, Kannada and Malayalam. She has also acted in several Hindi movies. Despite her success in the industry she left acting after marrying and made a comeback sometime later. After her marriage, her name was changed to Jyothika Saravanan.

Jyothika hails from a mixed descent – Punjabi from her father’s side and Maharashtrian from her mother’s side. Her father is the film producer Chander Sadanah and her mother is Seema Sadanah. Actress Nagma is her half-sister. She has two siblings – a brother and a sister. Her brother is an assistant director Suraj and her sister is Radhika who has changed her name to Roshni.

The actor did her schooling from Learner’s Academy, Mumbai. She has a major in Psychology from Mithibai College in Mumbai.

Jyothika married her long time fiancé actor Suriya on 11 September 2006. She has had met him during their movie shoots. The pair has done 7 movies as a couple together- Poovellam Kettuppar, Uyirile Kalanthatu, Kaakha Kaakha, Perazhagan, Maayavi, June R and Sillunu Oru Kaadhal. The pair has two children, daughter Diya born on 10th August 2007 and a son named Dev born on 7th June 2010.

The South Indian actress made her debut with the Hindi film Doli Saja Ke Rakhna in 1997. She starred in her first Tamil film Vaali (1999) and her first Telegu Film Tagore, opposite Chiranjeevi. Over the years Jyothika has done several types of roles.

The turning point of the actor’s career came with the movies Vaali (1999) and Kushi (2000). She was extremely successful in her career but after 2006 she left the industry when she married. The break lasted for several years until 2015 when she made her comeback with the film 36 Vayadhinile. After that, she did films like Nechiyar (2016), Chekka Chivantha Vaanam (2018), Magalir Mattum (2017), Kaatrin Mohzi, Raatchasi, Revathi and Thambi.

Other than her acting career she has also endorsed for several brands such as Idhayam oil and Paragon footwear in the early 2000s. She is the brand ambassador for RmKV silk sarees. She has endorsed for Comfort, Saravanan and Santoor soaps. She has appeared in advertisements of Aircel and Nescafe. She is the brand ambassador of Zee Tamil and plastic-free Tamil Nadu campaign.