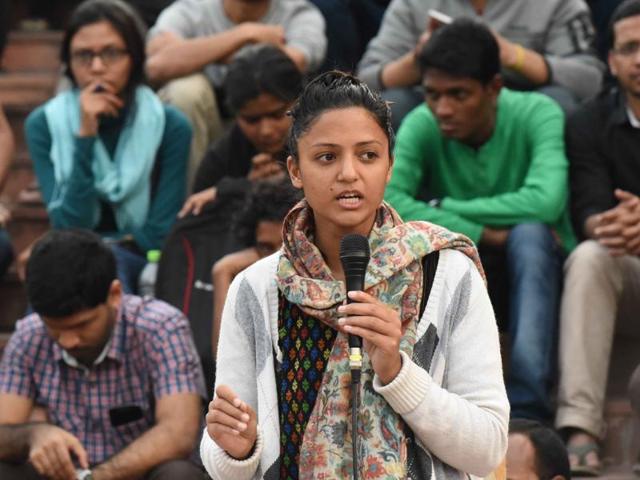 Proud to be a Kashmiri Shehla Rashid has engaged herself in political activities and been part of associations where she has always been the voice of people and tries to hit the target with her words.

Shehla as a political student

Shehla was born and brought up in Kashmir, where she witnessed a lot of suppression of voices of students there, and she didn’t see any scope of debate or discussion for their prevailing conditions. These incidents embarked on her interest in politics intending to become a voice of Kashmir and modify the situation in Kashmir for the betterment of Kashmiris.

Shehla witnessed that students union was not only affected by the college authorities and the government but also by the mindset of students in Jammu and Kashmir. The primary barrier was fear within the students. In some colleges, it was mentioned that forming a union was not allowed which included the college attended by Shehla.

This was also a point that rose her interest in student politics because at first, she tried to go with the flow and follow the rules made by the college authorities, but later it pinched her since she had a belief that a union is a must. According to Shehla, there was a need to channelize the voice of students in Jammu and Kashmir which was possible through unions that were not banned in Jammu and Kashmir but rather say avoided due to its results were usually like a slogan against India.

There was a need for the union to reach out to the authorities in a more sophisticated manner to get positive results.

Shehla Rashid Shora was born in Srinagar in the Habba Kadal locality in the year 1988. Her current age is 31 years. At the National Institute of Technology in Srinagar Shehla completed her study in computer engineering and later pursued a 10-week course in Political Leadership at the Indian Institute of Management, Bangalore.

Since Shehla completed her education in computer engineering at the National Institute of Technology at Srinagar, she took up a job with HCL Technologies.

She tried to raise issues related to the youth and acid attacks on women, but since politics, there was too tight with less space, Shehla eventually joined Jawaharlal Nehru University where she completed her M.A. in Sociology and MPhil in Law and Governance. She is currently pursuing a Ph.D. at Jawaharlal Nehru University, which is based on ‘How policymaking is affected by the decision made based on Algorithms’.

Shehla is one of the few women in Kashmir who are an activist who wants to bring about change in the situations of Kashmir and who are vocal about the injustice faced by youth and women there. Shehla has been active since 2010 when she became a part of organizing a youth leadership program in Kashmir. In 2013 when an all-female band named Pragaash faced harassment from Islamic conservatives, she came forward in their support and became vocal and raised the issue.

In an interview with Times of India, Shehla said that the girls might quit because of intolerance, rape and murder threats. She highlighted the hypocritical society as a reason for the situation since men are not taken under custody for giving rape threats, where men can enjoy item numbers in private but when innocent girls perform with full coveted dresses, it outrages the so-called morality of this society.

She was in full support of Pragaash being Kashmir’s first all-girls rock band. In September 2015 Shehla stood for elections of Vice President of the JNU ( Jawaharlal Nehru University) students union and won by 200 votes and was the first Kashmiri to win the position of VP at JNU where she was the highest polled candidate of the year.