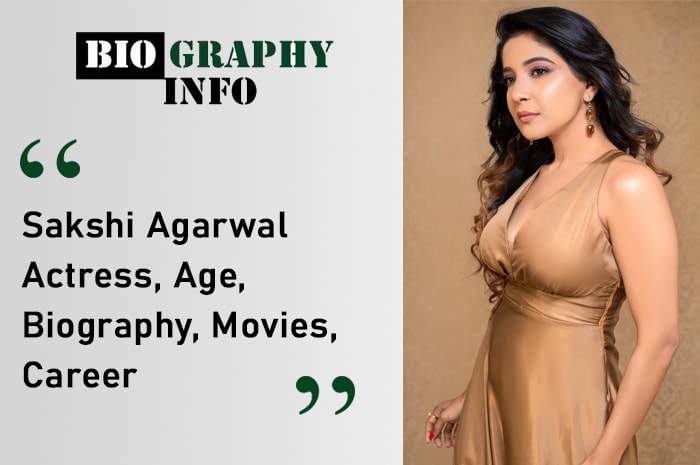 Sakshi Agarwal (born on 20th July 1990) is an Indian film actress and model who has appeared in Tamil, Kannada and Malayalam films. She began her initial career as a marketing consultant but soon shifted to acting after several modelling projects which gained her recognition.  She has starred as the lead of several South Indian films.

Sakshi is a native Nainital. She was born to a businessman and homemaker in Almora, Uttarakhand, India. She studied at Good Shepherd Convent, Chennai. She gained a bachelor’s degree in information technology at Anna University (2001-05) and received a medal there. The actor then got an MBA degree at Xavier Institute of Management and Entrepreneurship (2008-10).

She worked as a marketing consultant in an IT company before she shifted herself to the modelling and acting industry. She was a brilliant student academically.

Sakshi pursued a career as a marketing consultant and worked with Tata Consultancy and then Infosys during 2010. She then took part in a charity fashion show and was approached by a modelling recruiter who introduced her to advertisement directors. She then started taking up commercial assignments her weekends and appeared as a model on print.

She appeared in Malabar Gold advertisement with Suriya and subsequently quit her Infosys job in January  2013. She shot for a video album  Jillinu Oru Kalavaram and learnt dance from Shiamak Davar and started prepping her acting skills with Ratan Thakore. She then selected opportunities and signed her first films projects in early 2013.

She was the first cast in Kannada film Heddari and completed filming in August 2013. Her first release was Tamil telefilm No Parking. Her first theatrical release was Raja Rani in 2013. Her early films Heddari and Karaab story did not release. Her film release in a lead role was Kannada comedy film Software Ganda in 2014. In 2015 and 2016 she appeared in a number of low budget projects.

In 2017, after her crash course from Les Strasberg Theatre and Film Institute she did an indie English film Cherubs. Sakshi then was seen in Pa, Kaala (2018) with Rajnikanth and Orayiram Kinakkalal(2018).